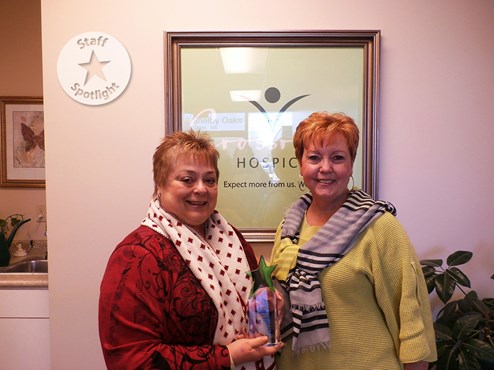 Memphis Clinical Director Vicki Noble, RN, CHPN decided to pursue a degree in nursing after spending nearly decade in retail management. “Both of my parents owned small businesses, and I did love the job, until one day I didn’t love it anymore.  I wanted to see if my brain still worked, so I took a class in medical terminology on a whim.”

Vicki discovered her brain more than just worked, and she set the goal of earning her nursing degree by age 40.  “And I did it with weeks to spare,” she says. “All along I knew I wanted to serve the elderly population. I had wonderful experiences with my grandparents. I loved hearing their stories, and their versions of history. I always felt like I got back more than I gave.”

Following school, Vicki spent seven years serving residents at a nursing home in Memphis. She was offered an advanced position with another facility, which she was not sure she would take, but is certainly glad she did. Just four months later she connected with the people forming the Memphis location of Crossroads Hospice.

From Zero to Four Hundred Patients: Seeing the Forest through the Trees

In January of 1998, Vicki Noble accepted a job as Clinical Director of the newly-formed Crossroads Hospice, which at the time was a one-room office with three staff members and zero patients. Today, 207 dedicated staff members serve 418 patients.

“We struggled the first year, and faced a lot of challenges. But I saw the need for someone who understood long-term care and hospice at the same time, and the benefits it would provide nursing home residents,” says Vicki.

As a small site, Vicki spent the first few years as Clinical Director involved in all aspects of care, from serving as a 24/7 on-call nurse to completing administrative duties. As the site grew, she began to concentrate more on making site-wide clinical decisions and implementing educational programs, both internally and externally. “I love doing in-services for nursing homes. From my nursing home experience, I know how hospice can fit in smoothly with their regulations and way of operating.”

Now Vicki’s role involves tough decision-making on a daily basis. “The hardest part of my transition as our site grew was learning to let go of some of the day-to-day details, like knowing every single patient’s name and what medication they took. I loved being involved in every aspect. Our corporate leaders helped me a lot with this, and the concept of learning to see the forest through the trees to make sure our sites provide consistent care.”

Vicki also credits her long-term growth with Crossroads Hospice to her working relationship with Executive Director Jean Harrison. “She has been working with me for 15 years, and when we look back it’s amazing what we’ve been able to accomplish. One of the reasons we have been here so long, besides loving what we do, is the fact that we are encouraged to put patient care first, which means the world to us. Everything else seems to smooth out. We sometimes say that we will stop working with Crossroads Hospice when we need our own services!”

For Vicki, one of the most rewarding aspects of being a clinical director is hearing and seeing the stories of her staff, patients and families. She recalls the growth of her site’s Memorial Christmas Tree. “During our first year we put a Christmas tree in our office, and filled it with ornaments to honor the patients we had lost. Over the years, this program has become our second annual memorial service. We now have four or five Christmas trees throughout our site, where families place ornaments honoring loved ones and reunite with the care team that served them. Staff members also display ornaments, and it is just as important as a process for them as it is for our families.”

Although Vicki no longer serves patients directly, her earliest experiences with Crossroads are some of her most vivid and give her the deep understanding of the rewards and challenges experienced by her staff. “I was once sitting with a very dignified lady who was actively dying but still fairly alert. She lived in a fancy high-rise care facility, and she was going to have no part in her friends seeing a hospital bed wheeled into her room, as much as it would help her breathing. So I held her up and sat in bed with her. And as she was sitting there, she reached out her hands, and was so surprised that I couldn’t see the same angels. She wanted me to touch their wings with her. Later on, she had this smile on her face and told me she could hear them singing. She died about ten minutes later, so peacefully. It’s something I will never forget.”

The very first patient Vicki ever cared for during her clinical experience in nursing school was just 15-years-old. “Almost 13 years later at Crossroads, we got a referral from this same nursing home, and the name seemed so familiar. It was the same patient, and I was very active in her care. I knew I had gone full circle. I was exactly where I was supposed to be.”