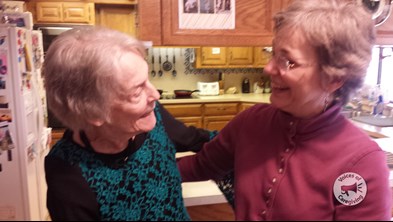 Denise Bynum and Debi Clark are caregivers through and through. Born and raised in Oklahoma City, Oklahoma, the sisters both became nurses in the area. Denise decided to work for Crossroads Hospice, a decision that became all the more significant to her and her family when the sisters’ roles as caregivers took an unexpected turn.

Five years ago, their mother Vira, who they know as “meemah,” began to exhibit symptoms of vascular dementia. In the past year, their stepfather – “peepah” – has begun to suffer from dementia, too. The couple has been together for over two decades and the last thing the daughters wanted was for them to be separated or have to leave their home, so they took on the caregiving responsibilities themselves.

“Our mother requires assistance with eating, dressing, bathing, almost everything,” says Denise. “My stepdad’s dementia has gotten really bad over the last year, too. He wanders, sometimes he’s aggressive, those types of things. They really require 24-hour care.”

Denise focuses on making sure the parents have their prescriptions filled and take their medicine. Debi sees her role as a policeman, intervening when they begin to do something they shouldn’t.

Once the daughters realized the extent of their parents’ conditions, they concluded they would need outside assistance. In addition to the two full-time caregivers they’ve hired, their parents have taken advantage of a variety of Crossroads services, like visits from the chaplain.

“One of the reasons I went to Crossroads to work was because of the services they offer to families,” says Denise. “That’s the reason I wanted to put my parents on their services — that extra layer of support is not just for them, but for me and for other caregivers.”

Denise and Debi both say the extra support has been invaluable to them. Supporting two parents with dementia, on top of their daily demands as nurses, can seem overwhelming.

“It’s very trying to do everything and still work,” says Debi. “There are times when I’ve felt so overwhelmed that any relief is such a blessing.”

It would be natural to assume that as professional caregivers, Denise and Debi would be particularly adept at their newfound role with their parents. Sometimes though, their work experience complicates their roles as family caregivers.

“I think it’s harder for us because we are nurses,” says Denise. “We both know what might be coming, we’ve seen the bad side of this. I think it’s hard to get out of that role of medical person and go into the role of caregiver.”

“For me, I have a tendency to want to put my clinical hat on and then I get there and the emotions take over,” says Debi. “That’s one of the reasons I wanted to have hospice get involved, because maybe I wouldn’t have to be so medical. I could maybe get to be the daughter sometimes.”

The sisters’ main message to other caregivers, derived from their own personal experiences as well as their work as nurses, is one that encourages asking for help.

“I see lots of caregivers in my line of work,” says Debi. “They’re taking care of their parents by themselves. They all feel guilty about asking for help. They don’t feel entitled to take a break. You have to be willing to give up something and accept that you can’t do it all. You have nothing to be ashamed of. You have to let something go, or you’ll break down and then your parents end up in the hospital or the nursing home or wherever you didn’t want them to be.”

“It doesn’t have to be something huge, but you have to find something that you can let go of,” echoes Denise. “Let somebody else cook you a meal once or twice a week. Let somebody else come in and clean your house occasionally. Take the time, even if it’s just 30 minutes a day, just for you.”

Debi, who also gives care to her mother-in-law, agreed to see a counselor when the stresses of caregiving mounted. She implores other caregivers to do the same. The sisters also point out that there are many options for group therapy through support groups in the caregiving community.

The most important thing, they say, is for children turned caregivers to understand that their roles must adjust. You might be used to receiving care and attention from your parents, but as they grow older and their health changes, so must your relationship.

The sisters’ relationship with each other has also changed through this experience, for the better.

“There’s a huge connection between us from this,” says Denise. “My sister is my hero. She’s not just helping our parents and her mother-in-law, but she’s a huge support to me. I can’t even imagine doing it without her.”

How to Choose a Hospice Provider

When the time comes to decide which hospice provider is best suited for a patient or loved one who is terminally ill, there are a number of important factors to weigh. Some factors to consider are more basic, such as the physical location of the provider. More complex issues will also enter the equation, such as the provider’s reputation with previous clients or how well it understands certain cultural and religious beliefs.