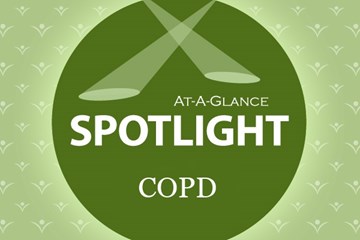 Chronic obstructive pulmonary disease, or COPD, is a serious lung disease that makes it more difficult to breathe over time. If COPD remains untreated, the disease can have serious effects on a person’s everyday activities. Many times, symptoms of the disease are brushed off as a sign of aging or being physically inactive. But COPD is the third leading cause of death in United States. The disease kills more than 120,000 Americans each year, or one person every four minutes.

What is COPD? What Are the Symptoms?

COPD is sometimes referred to as emphysema or chronic bronchitis. The tubes that transport air in and out of the lungs are partially blocked, making it more difficult for people with COPD to breathe. Healthy airways are elastic, and return to their original shape like a rubber band after being filled with air. In people with COPD, these airways lose their elasticity and become blocked and swollen, making it more difficult to transport air.

Symptoms of COPD include wheezing, a chronic, hacking cough, and shortness of breath. If the disease is severe, COPD can affect aspects of a person’s daily life such as walking, washing and dressing. Many people with the disease do not know their symptoms have a name. Though 12 million people have been diagnosed with COPD, studies by the National Heart, Lung and Blood Institute show that an additional 12 million people have gone without proper diagnosis and treatment.

The disease occurs most often in people over age 40, who have a history of smoking. It’s important to note, however, that as many as one in six people with COPD have never smoked. Other risks for the disease include genetic factors, exposure to second-hand smoke and certain chemicals.

Although there is no cure for COPD, early diagnosis and treatment can help people with the disease manage their symptoms and improve quality of life. The disease can usually be diagnosed by a doctor during a regular office visit through a breathing test called a spirometry. This non-invasive test measures the amount of air a person can blow out of the lungs, and how fast.

There are several ways to reduce your risk for developing COPD: