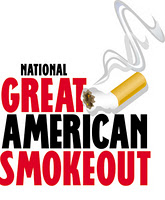 In the United States, tobacco use is responsible for nearly 1 in 5 deaths. That is why the American Cancer Society has sponsored the Great American Smokeout, encouraging thousands to join together and and give up smoking for one day. Hopefully motivating all smokers to kick their habit and aim for healthier lives.

Knowledge makes a difference! There is a high price for smoking, here are some facts about smoking and other health risks from the American Cancer Society that may have you thinking twice:

Join the SmokeOut and spread awareness of the risks of lung cancer, COPD and other related lung disease by sharing this with friends and family – Stay healthy!