May Is ALS Awareness Month: Spread the Word in Your Community 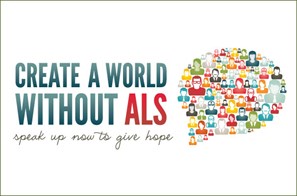 Amyotrophic Lateral Sclerosis (ALS), commonly known as Lou Gehrig’s Disease, is a progressive neurodegenerative disease that affects nerve cells in the brain and spinal cord. ALS causes severe muscle weakness, leading to paralysis and the loss of the ability to speak, eat, cough and breathe.

There is no known cause of the disease, although military veterans are approximately twice as likely to develop ALS as the general population. This fatal disease affects adults of all ages, but most commonly strikes individuals between the age of 40 and 70. The average life expectancy is two to five years, but for some, their course is quite rapid, while others may live for more than 10 years. Most cases of ALS occur sporadically; however approximately 5-10 percent of cases occur in someone with a family history of the disease.

Receiving an ALS diagnosis can be devastating and overwhelming. Although no two people are alike, there is a great deal of collective wisdom and knowledge available from specialists at multidisciplinary ALS Centers, people living with ALS and their family members and non-profit organizations like The ALS Association. Although currently there is no cure for ALS, many research advancements have been made in the last few years, including identification of certain gene mutations, helping us to better understand ALS and providing hope for the future.

This month, The ALS Association will host the 2013 National ALS Advocacy Day & Public Policy Conference in Washington, D.C. This conference empowers people with ALS and their families by allowing them to meet and share their stories with their Members of Congress on Capitol Hill. During these meetings, these individuals advocate for policies specifically designed to hasten the development of treatments for ALS.

One of the positive outcomes of advocacy efforts in recent years is The National ALS Registry. It may be the single largest ALS research project ever created and is designed to identify ALS cases throughout the nation. Most important, the Registry collects critical information about the disease that will improve care for people with ALS and help us learn what causes the disease and how it can be treated.

May is ALS Awareness Month, and this year’s campaign is “Create a world without ALS. Speak up now to give hope.”  You too can give hope to people and their families living with this disease by taking action in one or various ways:

Your actions this month – and throughout the rest of the year – will have a positive impact on individuals battling ALS. The more voices that speak up about this horrendous disease, the greater the impact we will have in creating a world without ALS.