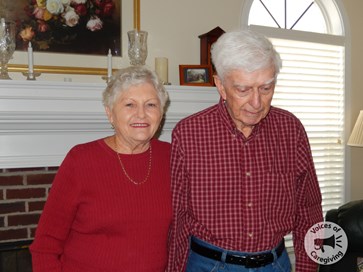 Like many couples, Yvonne and Charles wake up each morning and have breakfast together. But Yvonne is making sure Charles eats enough and doesn’t mix his cereal and coffee. Throughout the day she gives him the medicine he’s been prescribed to delay the development of his dementia, putting each pill in his mouth to make sure it’s taken. On the days when social workers from Crossroads Hospice visit, she runs errands while they stay with him. When she returns, Yvonne helps him eat again, and keeps up the conversation, though his responses are often very difficult to understand.

She asks Charles, her husband of nearly 60 years, if he remembers her.

Every night, Yvonne gets Charles ready for bed. He can’t remember where their room is. For Yvonne, there is a moment each night she looks forward to when she gets a glimpse of the man she remembers.

“Every night when I put him to bed, I tell him I love him and give him a goodnight kiss,” she says. “He’ll say, ‘I love you too, sweetheart.’ That’s the only thing that lets me really know he still remembers. He still does that.”

In 2002, Charles was the first one to notice that his memory was failing him. The couple had both retired in 1998, he from a career with JCPenney and later the Postal Service, she from a career as a registered nurse. They traveled the country in an RV. Charles could still function, but his memory was getting worse. In 2006, their primary care doctor prescribed a regimen of medicines to prevent the onset of Alzheimer’s. By 2012, Charles’ dementia progressed and Yvonne became responsible for taking care of him full time.

“Basically, he needs support with everything,” she says. “The biggest challenge for me is seeing him daily and his inability to do things. It’s more of a heartache than anything else. He’s a very good person. Everyone liked him, and he had a very good personality. To see him regress like this, I get tired. I get frustrated.”

Yvonne’s cousin introduced her to Charles at a church social in her hometown of Fairfield, Alabama. When they were 14, they began going out on group dates under the watchful eyes of parent chaperones. They dated through Yvonne’s time at nursing school and when she graduated, they married. They lived throughout the South, following Charles’ career to Tennessee, Mississippi and eventually to their current residence in Snellville, Georgia.

Yvonne had experience with the complications of dementia in her nursing career and she had helped give care to her mother, who suffered from Alzheimer’s late in life. While at a meeting for caregivers, Yvonne first learned about Crossroads Hospice and decided she and her husband could use the extra help.

“Crossroads Hospice has been very good,” she says. “I really feel like they have helped me by just coming in and sitting to talk with me for a while. We talk about his needs and mine. With their help, I have a much better mental disposition than I did before. I don’t feel like I’m alone. I feel like I’ve got support and that means a lot.”

Yvonne appreciates the support, because she knows that in order to keep her husband in the home they’ve shared for decades, maintaining her own care is as important as providing his.

“It’s an ongoing thing for me to stay strong and healthy,” she says. “There are days when I’m down and I feel bad. Any human that’s in this situation will feel that way. I realized that I have to maintain myself physically and mentally to keep a pleasant atmosphere and do things for him that I think he likes, like play music for him. Some days it’s not easy but hopefully, I can keep myself and take care of him. That’s my goal.”

Insomnia and the Terminally Ill

There’s nothing better than a good night’s sleep. Unfortunately, sleep disorders are quite common, even in the elderly and terminally ill.

End-of-Life Rally: How to Make The Most of It

For families sitting bedside with a dying loved one, an end-of-life rally can be a surprising twist.

How to Stay Organized as a Caregiver

Family caregivers play an essential role in the care of their loved ones. The work of caring for a loved one is rewarding, but also overwhelming as caregivers juggle hands-on care with keeping on top of appointments, medication, and financial documents. Taking the time to get organized can help make all of this a little easier.