This blog series is about various customs and practices that someone involved in end-of-life care might encounter.

Last time, we looked at Jewish rituals and traditions when caring for the sick and elderly in end-of-life stages. Here, we look at Jewish after-death traditions.

At death, the body is handled with dignity and respect. 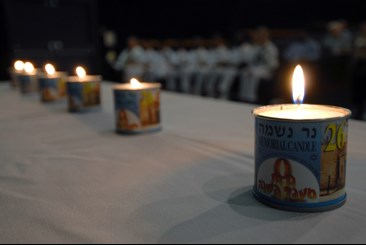 The body should not be left alone. Many Jews believe the soul is still present after death until the body is buried. For this reason, some people speak to the deceased at this time. Conversation near the body should be respectful and appropriate to the sacred moment. Some

Jews prefer that the eyes and mouth are closed gently, hands and arms extended at the side, the jaw bound up and the body covered with a sheet. The feet are toward the door, and a candle is lit near the body. At the moment of death this prayer can be said:

The Lord, He is God. (Recited seven times)

Israel! The Lord our God, the Lord is One. (Recited seven times)

Many Jews say the following blessing at the time of death or when hearing of a death:

Blessed are You, Lord our God, King of the Universe, the true judge.

I was present at the death of a Jewish woman, and moments after she died, her son stood next to her body and read the Eshet Ḥayil, Proverbs 30:10-31, which includes the famous opening, “A wife of noble character who can find? She is worth far more than rubies.” This passage is not typically associated with dying, but he was, of course, free to call on his tradition in a way that was meaningful for him at that time.

The presence of a dead body is considered a source of ritual or spiritual impurity (not physical uncleanliness), so there are certain practices that may be enacted, or things avoided. You should be supportive of the ones present in what they choose to do.

Jews prefer to bury the deceased as quickly as possible, usually within 24 hours. If death occurs on the Sabbath (Friday evening through Saturday evening), a funeral is not held until Sunday, and observant families might not do any funeral preparation on the Sabbath. If the body is at a facility, they may request that it remain there so that the body will not be alone until a funeral home can retrieve it.

Most Jewish communities have a burial society, Chevra Kadisha, who can take care of the preparation for burial. One can be found at the National Association of Chevra Kadisha.

Kaddish, a mourner’s prayer, is recited by relatives at the end of the funeral service and during the year of mourning. Note that this prayer doesn’t mention death but praises God for the gift of life:

Exalted and hallowed be God's great name in the world which God created, according to plan. May God's majesty be revealed in the days of our lifetime and the life of all Israel — speedily, imminently, to which we say Amen.

Blessed be God's great name to all eternity.

Blessed, praised, honored, exalted, extolled, glorified, adored and lauded be the name of the Holy Blessed One, beyond all earthly words and songs of blessing, praise and comfort. To which we say Amen.

May there be abundant peace from heaven, and life, for us and all Israel,

to which we say Amen.

May the One who creates harmony on high, bring peace to us and to all Israel. To which we say Amen.

Shiva, an intense time of mourning, is observed by a family for the seven days after a death. One ancient Jewish text declares, “Lament your dead! Do not hide your grief! Do not restrain your mourning!” Visitors bring food and consolation. In Orthodox Jewish homes, specific practices are followed, like covering mirrors, sitting low to the floor and not wearing shoes. A year after death, the deceased will be remembered by the lighting of the Yahrzeit candle and reciting Kaddish at the synagogue.

Death is assumed to be a normal part of the life cycle. Mourning practices in Judaism do not express fear or avoidance of death but are meant to show respect for the dead and to comfort the living, who are experiencing a significant loss. Jewish mourning recognizes the changing intensity of grief over time and promotes a healthy return to normal life.

I hope this blog post helps readers who belong to other faiths appreciate these rituals and the rationale behind them. Jewish readers are welcome to comment with anything that will help the rest of us provide meaningful support for Jewish patients on hospice.