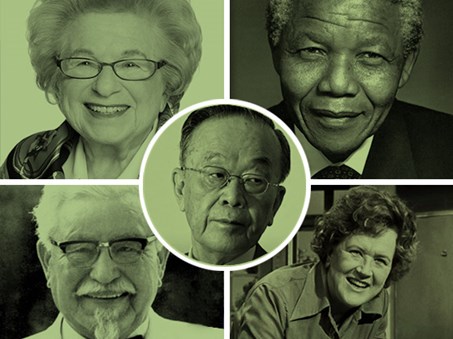 On Senior Citizens Day, we recognize all of the contributions that senior citizens make in communities across the nation.

We also recognize that age is just a number and that success has no regard for that number.  In our younger years, we can often be tricked into thinking that we’ll know very well whether we’ll someday be successful in our teens, 20s or even our 30s.  That perception couldn’t be any further from the truth.

Finding success or your big break later in life is more common than you may believe.  It’s never too late to take the first step toward following your dreams and making your fortune off of them.

Here are just five examples of visionaries who proved that idea by welcoming change and, in turn, prospering well into their 40s and beyond:

Remarkably, Colonel Sanders didn’t franchise his multi-billion dollar international fast food chain Kentucky Fried Chicken until he was 62.  He didn’t even begin cooking until he was 40—and before that, he just worked different odd jobs until deciding to sell his fried chicken on the side of the road.  Sanders was fortunate enough to die a very rich and happy man thanks to his willingness to pursue his dreams.  Better late than never.  Today, he has one of the most recognizable faces worldwide in the food industry.

When Dr. Ruth Westheimer was young, she wasn’t concerned with the premier sexologist in the United States.  She was concerned with surviving the Holocaust in World War II Germany.  After the war, Dr. Ruth eventually immigrated to New York City, where she got her master’s degree in sociology from the New School in 1959.  It wasn’t until 1980, at age 52, when she convinced New York broadcasters that they needed for sexual education programming and eventually landing herself her famous radio show “Sexually Speaking.”  Now in her 80s, Dr. Ruth, ever the active senior citizen, continues to write books and produce video and lectures in her area of expertise.

Sure, Nelson Mandela became involved in South Africa’s anti-apartheid movement way back in his 20s, but his greatest accomplishments came much later.  After spending 27 years in prison for standing up to his government, he was released in 1990 and awarded the Nobel Peace Prize for his work in ending the apartheid regime.  In 1994, at the age of 74, Mandela, then a full-on senior citizen, became South Africa’s oldest ever president.

Perhaps the least recognizable of the bunch, what Taikichiro Mori lacks in international fame, he makes up for in wealth, being the founder of Japanese property management firm Mori Building Company. Between 1991 and 1992, this Japanese businessman was named the richest man in the world at the age of 88.  His estimated net worth at the time was $15 billion!

Julia Child brought French cuisine to American television between the 1960s and 1980s and quickly became a favorite of the American public.  Little do most people know, she actually spent most of her career in writing and advertising before becoming hooked on French food and beginning her first show in 1963 at the age of 52.

It just goes to show you, age is only a number.  Remember, on this Senior Citizens Day, the older you are, the more experiences you’ve had and the more knowledgeable and likely you are to enjoy some successful and prosperous golden years.

If you found this information helpful, please share it with your network and community. Copyright © 2015 Crossroads Hospice. All rights reserved.