COPD Awareness: It Begins with Education 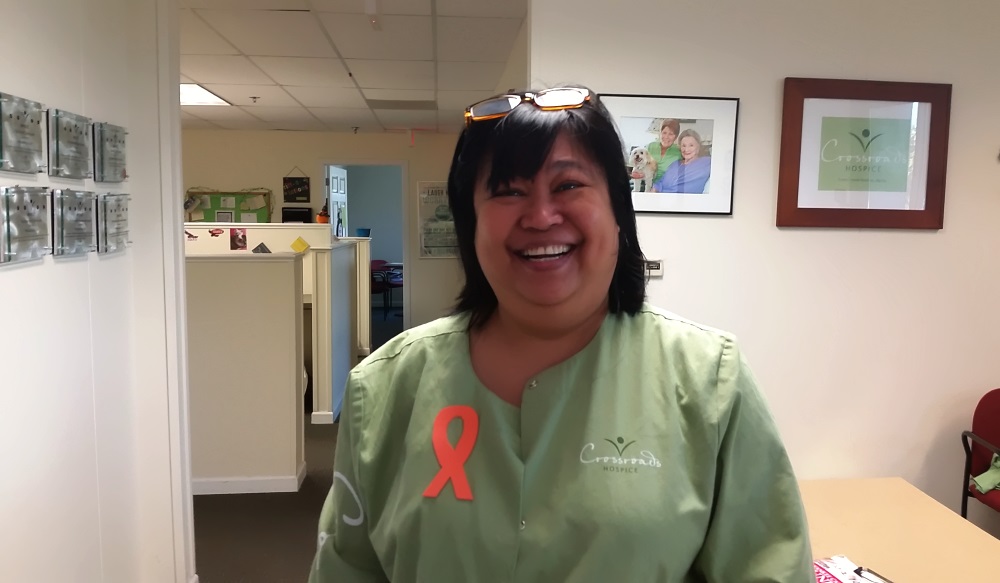 Chronic obstructive pulmonary disease, otherwise known as COPD, is a condition affecting the lungs from which more than 11 million people in the U.S. are currently dealing with. Being a disease that gets worse over time, these patients can often find their condition ending with hospice as it progresses to end-stage COPD.

Dr. Valaree Smith, a medical director with Crossroads Hospice & Palliative Care in Kansas City, says that the presence of end-stage COPD in hospice is actually quite common.

“COPD is probably one of the top four diagnoses for hospice,” Valaree said. “From my experience [its progression to end-stage] takes years and there are things a person can do to decrease the rate at which it progresses and one of those would be to stop smoking.”

Being that November is COPD Awareness Month, Crossroads is hoping to avoid seeing end-stage COPD hospice patients sooner than necessary by spreading just that: COPD awareness. In order to spread COPD awareness, it’s imperative to take a wider look at the disease as a whole, from where it begins to how it feels, is treated, and beyond.

As one might imagine, this type of lung disease is most typically the outcome of a lifetime of smoking.

“Usually the number one cause of COPD at end-of-life is smoking,” she said.“A lot of these patients were or still are heavy smokers.”

The “still are” portion of this is what many doctors find most worrisome for a patient. As noted by Valaree, progression from diagnosis to end-stage COPD is determined by case and can often take years when patients take corresponding measures to live a healthy life. Continuing to smoke throughout the process, while on oxygen, is obviously not one of these measures.

Others may experience COPD because of rare conditions that cause deficiency of certain enzymes—but not so often.

“That’s very, very rare,” Valaree continued. “There are a few people that can get it because they’ve been around people that have been heavy smokers. But the predominant reason why people end up with COPD is because of the smoking.”

How does end-stage COPD feel?

The biggest cause of discomfort in end-stage COPD is the extreme shortness of air that patients experience. Everyday tasks become mountains that need to be overcome.

“Things that they were able to do without even thinking about” Valaree said.“They can maybe just walk from their living room to the bathroom and at that point they’ll have a recovery time where they have to sit for air and they’re struggling with their breath. [It] may take 5-10 minutes just to recover.”

Just from such a small distance. Along with that comes increased wheezing, increased coughing, increased numbers of COPD exacerbations where they have extreme difficulty breathing and may have to have steroids just to get the inflammation down. This is all resulting from the damages that smoking puts on a person’s lungs.

“Whereas you or I with healthy lungs would take a deep breath,” she said, “we can feel the expansion of our lungs and when we exhale we can see that recoil. When somebody has COPD, they don’t have the recoil anymore so they’re not exchanging air.”

At end-stage COPD, a patient’s lungs have almost entirely lost their elasticity.

The lost elasticity of the lungs at end-stage COPD makes inhalers used in its earlier stages ineffective, as the ability to inhale becomes an inability. As inhalers become ineffective, patients often find another roadblock.

“Most patients who have COPD and that I receive on hospice have been on inhalers for quite a few years,” Valaree said of her experiences. “Many people that come to hospice have already used all of [the COPD] medications and they’re still having decline.”

The challenge becomes the transition of a patient from an inhaler—a treatment that they have become very dependent on but has gotten to a point where it is no longer really effective for them—to doing nebulized treatments which are more effective for somebody who no longer has the elasticity and recoil in their lungs.

Inhalers can become lifelines for patients. They go out with them, they’re living with them all the time and that’s their rescue.

The importance of COPD awareness a caregiver

As a caregiver for a COPD patient, COPD awareness is incredibly important in terms of catching its signs and reacting accordingly. Signs such as increased coughing, increased in shortness of air, increase of sputum production can be caught early and, accordingly to Valaree, can be approached to create a more positive outcome.

COPD awareness remains central to avoiding COPD diagnoses as whole and prolonging lifespan and comfort thereafter. It’s never too late to change a patient’s outcome in even the slightest way whether it is through that increased lifespan or simply through more effective comfort and care.

At Crossroads, we’re here to, as Valaree says, “educate [caregivers] on how to use the medication for their loved ones” and facilitate these better outcomes. Never hesitate to reach out to the Crossroads team for support in any of its forms.

Perhaps you’re asking yourself, “How does hospice work more specifically in these scenarios?” Please give us a call at 1-888-564-3405 or visit the Crossroads website today to learn more.