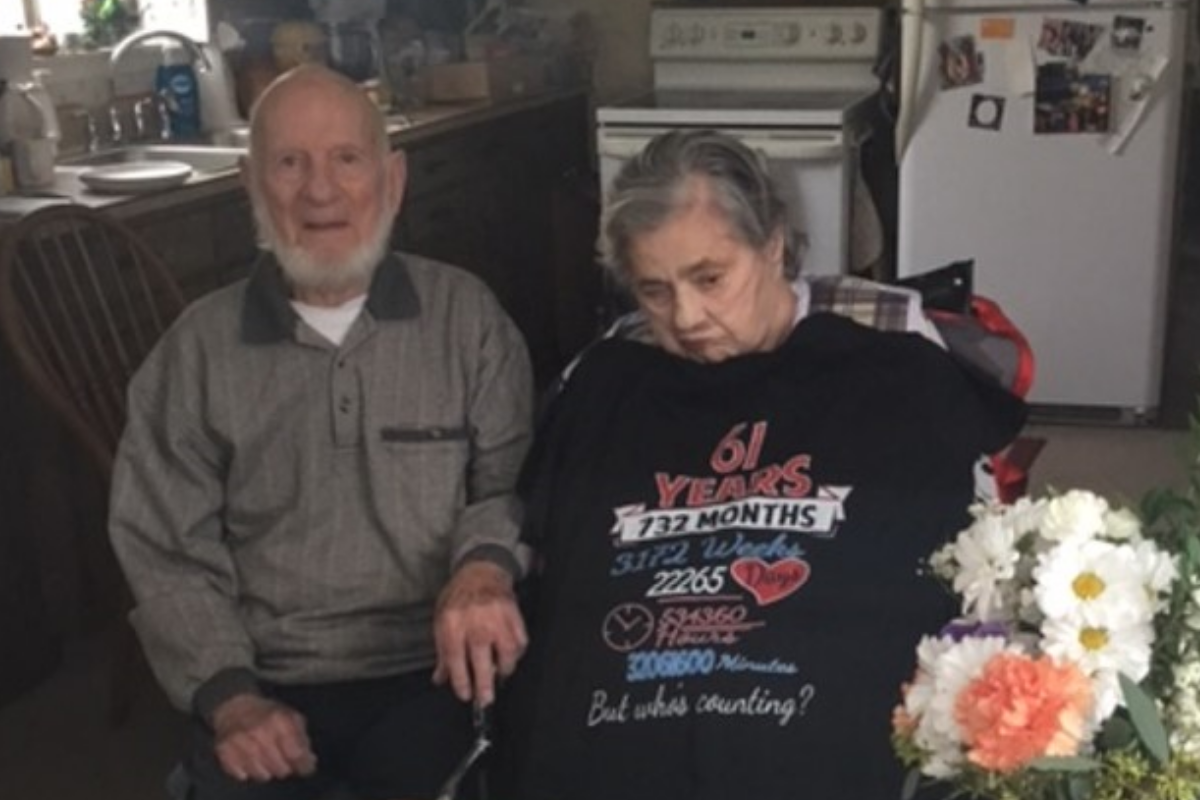 It was an unconventional meeting for 1957. John VanDyke had moved to Newton Falls, Ohio, to live with his brother after high school graduation. Soon after his arrival, John’s friend had heard about a local party, so they stopped by to visit. That’s where John met Rosemarie. But this was not your average party.

“Not many can say the same, but I met my wife at a girls’ pajama party,” recalls John. “Don’t get any ideas, though. It was innocent.”

There’s wasn’t an immediate love connection, but John and Rosemarie stayed in touch. He was working down the street from where she was attending to beauty school. He would take her home after school sometimes, and after a time, they started dating.

“She was a very beautiful young lady. She looked like Sophia Loren. And we got along well. We liked the same things,” said John.

Rosemarie and John both love to travel. One year, the couple traveled to Nova Scotia on a motorcycle. When John suggesting camping, Rosemarie proposed a compromise.

When things got more serious, John proposed to Rosemarie. But Rosemarie said no. That it wasn’t time. Shortly after, John joined the U.S. Army, shipping off to Yuma Proving Ground (YPG) in Yuma, AZ. That’s where some love stories may have ended. Not for Rosemarie and John.

John hadn’t seen or heard from Rosemarie in two years when, in a giant leap of faith, Rosemarie called him in Yuma. Her question: do you still want to get married?

“I really wasn’t sure, but I said I’d consider it,” said John.

Rosemarie boarded a train from Ohio to Yuma—a ride that John estimates would have taken three to four days—to see if there was still something there. Both of them nervous, Rosemarie arrived to find John at the train station ready to give it another shot.

“When she arrived, she was scared to death, and I didn’t know what to expect. I hadn’t seen spoken a word to her in two years,” said John. “But she never stopped thinking about me. She knew that I was steadfast, easygoing, and she trusted me. She was comfortable with that. And from then on, it was just happiness.”

Four years after their first meeting, Rosemarie and John were married in a small ceremony at Lutes’ Gretna Green Wedding Chapel in Yuma. The only witness—the officiant’s wife, still dressed in her nightgown—stood behind Rosemarie for the minutes-long ceremony. The 21- and 22-year-old newlyweds traveled right across the border to California for a celebration dinner, just the two of them.

Over the next few years, life brought the VanDykes from Yuma to Fort Bragg in North Carolina. It also brought them two children— a daughter, Amy, and a son, Jeff. But shortly after Jeff was born, John was sent to Korea for 13 months, and then to Alabama. All the while, Rosemarie came home to Newton Falls with the kids and stayed with her mother, running her very own beauty shop.

It was after he was stationed in Alabama that John realized the Army wasn’t for him. He was a family man, and he needed to be home with his wife and kids. He was honorably discharged and moved back to Newton Falls. After the Youngstown steel mill where he worked went bankrupt, John had no choice but to find other employment. Though Rosemarie’s shop was successful, Amy and Jeff were in college at Carnegie Mellon and University of Pittsburgh, and the load was getting heavy.

John took a night job in Cleveland and found an apartment nearby. He would come home when he could and, after five years of long days and even longer weeks, John got a position in the same factory that allowed him to commute. It was 60 miles each way, but it was worth it. He credits Rosemarie for holding down the fort.

“Rosemarie is a wonderful mother. She’s fearless. As a local Campfire Girls leader, she once drove a 14-passenger minibus full of moms and troop members to Colorado from Ohio,” said John. “I taught her to drive it, and she was on her way. She’s never let anything stop her.”

Through the 14 years that John was employed in Cleveland, the VanDyke family spent as much time as they could together.

“While I was away, we planned our vacations around the holidays. My birthday is the day after Christmas, our anniversary is the following day, and Rosemarie’s birthday is right after, on February 10,” said John. “Rosemarie and I have visited 30 different countries. We’ve traveled all over Europe, to Costa Rica, to Mexico … anywhere you can imagine.” 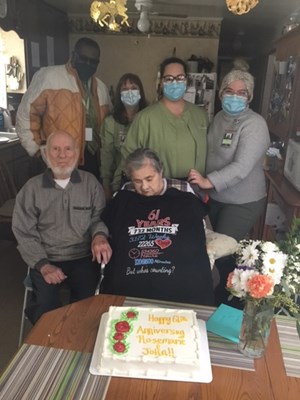 The VanDykes just celebrated their 61st anniversary. Though their lives have not been without ups and downs—most recently, Rosemarie’s stroke that has left her paralyzed on her left side—their love story is rich and has seen them through it all. That’s why, when asked his recipe for a good marriage, John’s answer is unsurprising.

“Find someone you can really trust. Someone you care for. Someone you have a great deal of affection for,” said John. “And then build your relationship upon sharing things together. Travel. Do the things you love. Just do it together.”

Three years after her stroke, Rosemarie requires a significant amount of help throughout the day. It hasn’t been easy for John—nor has it been easy for Amy, who comes up from Columbus every other week to cook, or Jeff, who makes the 10-hour drive from Concord, Massachusetts, for monthly visits.

If you found this information helpful, please share it with your network and community.
Copyright © 2022 Crossroads Hospice & Palliative Care. All rights reserved.

How to Make Decisions for Someone at End of Life

When we think about healthcare choices at end of life, we may already have definite ideas of what our wishes are. The bigger challenge occurs when we are asked to make end-of-life decisions for someone else who can no longer make healthcare decisions for themselves.

Saying Goodbye in a Special Way

Assisted living facilities can be an excellent way for seniors to continue to live an independent life while being provided with help with daily life including housekeeping services, meals, and personal care. It’s a social atmosphere where residents make friends that feel like family. This closeness means the entire community mourns when a resident dies.

Earl and Myrtle Mills: Two Halves of a Whole

It has been said that behind every good man is a great woman. That has never been more true than in the case of Earl and Myrtle Mills. They met as teenagers, living on the same street in Hamilton, Ohio.