An Intern’s First Experience with Hospice 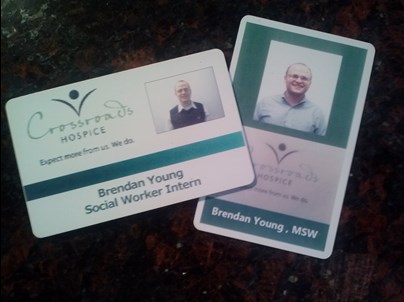 Brendan Young was a junior at La Salle University when he began chatting with the family member of a prospective student at an Admissions Night event. Discussing his prospects for a career in social work, the former hospice nurse asked if he had ever considered hospice.

He hadn’t, but it came up again as he discussed internships with his advisor, and he was soon accepted at Crossroads Hospice.

“I decided to go into it with an open mind,” he says, “I wanted to learn more about the profession and this was my first time working directly with people in the field.”

Brendan shadowed Veteran social worker Kathe Sobczak through this past spring, getting to know seven patients.

They would meet with the patients and their families, and he even participated in arranging some Gift of a Day events. “Kathe taught me to meet people where they are,” he shares.

One of his most memorable patients was a World War II Veteran.

“We talked about his military experience. I had never interacted with Veterans before. They were hard conversations. He had a lot of issues with things he had seen and done during the war.”

Another was a patient suffering from dementia. Brendan admits, “It was a hard concept to grasp. She liked James Brown so I would play it for her, and I couldn’t tell if she was enjoying it or if I was just projecting that response.”

After Brendan’s internship at Crossroads Hospice ended, he stayed in touch and continued to volunteer with two patients. “While the obvious negatives break your heart, hospice is full of so many positives. I had a rapport with these families and wanted to continue to be there for them.”

“Ultimately, you learn to honor making people comfortable … not just about dying, but comfortable living what’s left to the fullest and respecting their wishes,” he continues. “It’s a really neat time in people’s lives. So many people feel uncomfortable, but it’s very special. After all, there are only two sure things in this world: birth and death. I just want to support people in that final time.”

If you need more information on hospice or pursuing a hospice internship, please call us at 888-564-3405 or visit our website.