Chaplain Greg Volpitto: A Power in Presence, Silence and Laughter 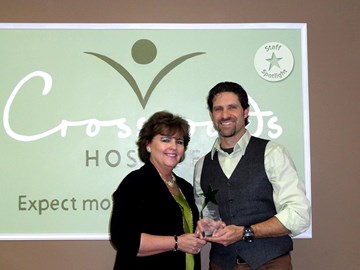 From Youth Pastor to Hospice Chaplain

St. Louis Greg Volpitto has always felt a profound calling to serve others. He spent years as a youth pastor and worship leader with teenagers before exploring the world of chaplaincy with police and fire departments in Creve Coeur, MO.

“My heart was encouraged and stirred by chaplaincy. I felt a real sense of enthusiasm, and enjoyed engaging people,” says Greg. “You have the opportunity to be in people’s lives who you wouldn’t necessarily find in a church, and engage all different works of life.”

During his time as a police and fire chaplain, he practiced the “ministry of presence” by spending time with officers and firefighters. “I sat with people and rode along with them in their vehicles, without intentions. When things were not good, and someone wanted to open up to me, I was right there.”

Greg recalled a time when a young woman in her mid-20s had lost her husband in a tragic accident. She had not heard from him, and the police had not yet notified her. “I just sat next to her. I did not preach, or try to say wise words. We need to remember the importance of silence in the same way we use our voice. I ran into her a few years later, and she knew exactly who I was. She thanked me for being there with her in that moment.”

Greg explored many directions within the healthcare industry before becoming a hospice chaplain. He served as a preacher at funerals, earned his license to drive limos during funeral processions and remove deceased bodies with dignity, and learned about Medicare through a brief period as an insurance salesman. All of these experiences turned Greg’s heart to the hospice industry, and helped him enter the field with training and a deeper perspective on the needs of patients and families.

The Power of Laughter

Greg shared what he enjoys most about working at Crossroads Hospice. “The culture of Crossroads is empowering and encouraging. I love being part of a team that works as a team. My wife, who’s also a counselor, thinks I’m goofy, but I go home with a smile on my face and come to work the same way. I talk about what I do with joy and laughter.”

Laughter is very important to Greg. “I had a job as a clown at birthday parties during high school. It was so much fun to put a mask on.” He no longer needs a mask. “Humor tears down walls. You unlock the freedom for people to have emotions.”

Greg explains the specific role of a chaplain within an interdisciplinary team. “Chaplains care for what’s underneath and what’s meaningful to people. Sometimes, people miss being part of a spiritual community, and we try to connect them with opportunities to experience services. Other times, patients might miss hearing music in church, so I bring my guitar to play and sing hymns. Our team sometimes becomes someone’s only connection to the outside world. We create moments where people have been heard, validated and loved. We preserve dignity and remind patients that they are not an illness, but a person.”

There are some times when Greg helps patients and families through struggles in spirituality. “A young, once very active patient was expressing his anger at God. At first, he told me I didn’t need to visit him again. I let him know that God could handle whatever he had to say to him right now. Eventually, he asked me to come back and we worked through his struggles together. I think this was because I always allowed him to express his anger with his faith, and without discounting his feelings, I still pointed to hope.”

Finding Inspiration from Patients and Family

Greg is instrumental in recognizing Veterans at the St. Louis site. “One of our patients, George, had dementia and wasn’t very responsive. He was a Navy WWII veteran, and we knew he loved animals and the outdoors. His family talked about a Veteran’s recognition, but was not sure it would resonate with him. For his recognition ceremony, the World Bird Sanctuary brought a bald eagle, and a naval officer brought photos of George’s former ship. When George saw the pictures, he immediately saluted the officer, and the bald eagle too. It showed all of us how George was still very much with us. Something very meaningful happened in that moment.”

He recalled another experience helping a patient relive her days as a church organist. “We arranged to take her across the street to church for a private organ recital. As she heard the music, with her eyes closed, her fingers started moving along as if she were giving the concert. Her family was overwhelmed with emotion. We all were. This reminded us of the ways we connect with people are often not verbal and require creativity.”

As a chaplain, Greg continues to draw inspiration from his patients, the Crossroads Hospice staff, and his own family. He and his wife have three children – ages 16, 12 and six, and a dog fondly named George Bailey after the character in “It’s a Wonderful Life.” Greg’s father is also a pastor. “Growing up I would go with him as he’d visit nursing homes with a keyboard. I never thought I would end up following in his footsteps. Years later I followed the exact same path, visiting patients with my guitar, and I absolutely love it.”