At a Glance: Celiac Disease Awareness 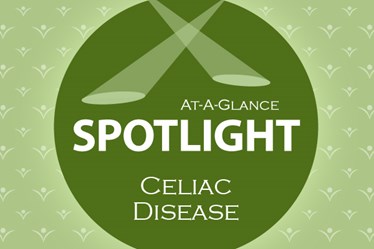 Celiac disease is an autoimmune condition that damages the small intestine and interferes with how our bodies absorb nutrients from food. People with the condition are unable to properly digest gluten, the protein found in wheat. In addition to common foods like bread and pasta, gluten is also found in a variety of processed foods such as salad dressings, soups, and lunch meat.

It’s estimated that one in 133 Americans, or 1 % of the population, is affected by celiac disease. The condition affects all ages, races, and genders, but is more common in those with a family history of the disease.

Every time a person with celiac disease consumes gluten, an allergic reaction results in symptoms such as bloating, rashes, bone pain and fatigue. According to the National Foundation for Celiac Awareness, there are more than 300 symptoms of celiac disease, and people may show different signs of gluten sensitivity at different ages.

Accurately diagnosing celiac disease can be a difficult process, as the digestive symptoms are similar to those found in other gastrointestinal diseases such as Irritable Bowel Syndrome, Crohn’s disease and lactose intolerance. According to the National Foundation for Celiac Awareness, 83 percent of Americans with celiac disease are undiagnosed or misdiagnosed with other conditions. It takes an average of six to 10 years for a someone suffering with a gluten intolerance to receive a correct diagnosis. The only known treatment for celiac today is a 100% gluten-free diet, as there is no pharmaceutical cure.

Osteoporosis is a common complication of untreated celiac disease. When people with celiac disease eat foods that contain gluten, the lining of the small intestine is damaged, and as a result, other nutrients like calcium are not absorbed properly. Low bone density is common in adults and children with the disease, and the risk of osteoporosis is especially high in patients who were not diagnosed until adulthood and have experienced intestinal damage overtime.

Colorectal cancer is the fourth-leading cause of death in the United States. Many might assume that celiac is tied to a higher risk for colon cancer due to the digestive symptoms of the disease, but a study by Columbia University found that celiacs face only an average risk for developing colorectal cancer.

Maintaining a gluten-free diet is essential to living well with celiac disease – from managing symptoms to reducing one’s cancer risk.