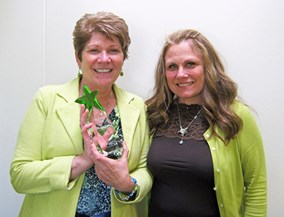 A Voice for Patients:

Irene Rifkin, Assistant Clinical Director of Crossroads Hospice in Plymouth Meeting, was driven to become a nurse and to follow in her mother’s footsteps. “My mother was my greatest inspiration. She earned her GED and went to nursing school in her mid-forties. Hearing about the way she cared for patients made me want to do the same.”

Irene found her niche in long-term care serving the elderly population, first as a unit manager and then as a director of nursing. “I learned to incorporate everyone’s strengths from all departments within a facility, from nursing to housekeeping and nutrition. We all make a difference.”

She joined the Crossroads Hospice team in 2006 when a location was first opening in the Philadelphia region.  “I felt a calling to hospice care because of my personal experiences with loss. My mother died of breast cancer, and during my father’s final few months with COPD, I’d asked my physician about hospice, but he was not placed on service until the last two or three days of his life. This made me want to serve as a voice for patients and their families.”

Irene clearly remembers Crossroads’ first patient in Philadelphia. “The whole team met the patient. He was very cautious at first, so it took time to develop this relationship with him and his family. At the end of his life, he had become very unresponsive. I remember walking into his room with his daughter at his bedside. When I called out his name, he held out his arms and said my name. He passed away shortly after. I will never forget how powerful this experience felt.”

As Assistant Clinical Director, Irene helps the clinical team work together to deliver the highest quality of care to patients and families. “We push aside all of our titles, and bring the best we have to offer to the patient and family. If a patient is not doing well, we do not say ‘see you tomorrow.’ We will see you multiple times a day and involve the whole team.”

Irene recently shared her knowledge of keeping patients with Alzheimer’s safe at a neighboring facility through several educational sessions. Since implementing some of Irene’s techniques, the facility has reported fewer falls, which is common among patients with dementia.

Irene understands firsthand the importance of being there for patients during the most critical moments, and embodies Crossroads Hospice’s vision of doing more when serving as a team leader at the Philadelphia location. She shared one of her most meaningful experiences with a patient:

“The patient and his wife had been married a long time, and she had taken great care of her husband. It had taken a while for us to build trust with the patient’s wife, since she was used to doing things a certain way for so many years. It was February and there was a snowstorm on its way, and I knew he did not have much time. We called their seven children, the family shared stories for hours into the night. But when I looked at his wife I could tell she was not at peace yet. So I said, ‘try singing to him,’ because I knew she was in the church choir. Within a few minutes, he passed away. At his memorial service, she came up to me and told me how much her husband loved when she sang. You don’t realize the difference a suggestion like that can make. But so many people don’t have this peaceful experience at the end of their lives. And that’s why I do what I do.”

We’re proud to honor Irene as our Crossroad Hospice “Staff Spotlight” recipient of the month and recognize her fellow Assistant Clinical Directors who are ensuring that highest quality of care is delivered to our patients every day, such as: Erika Crook, RN (Atlanta); Cahty Beahr, RN (Cleveland); Wendy Essig, RN (Kansas City) and Violet Gohil, RN (Memphis).

What We're Thankful For

The staff, volunteers, and leadership team of Crossroads Hospice & Palliative Care have so much to be grateful for this Thanksgiving. We asked a few members of our team to share what they’re thankful for this year.

Delivering on its promise to continually shape the way end-of-life care is viewed and administered, Crossroads Hospice & Palliative Care recently named Danny Cox, BSN, Senior Vice President of Clinical Operations for Carrefour Associates, the management firm for Crossroads. In this role, Danny is responsible for leading the enterprise-wide integration of all clinical operations for Crossroads.