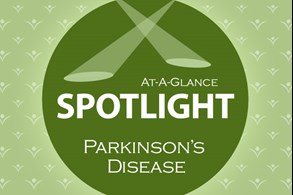 Parkinson’s disease is a neurological disorder, which causes difficulty with movement. A chronic and progressive illness, symptoms continue and worsen over time. There are nearly one million people in the U.S.living with Parkinson’s disease, according to the National Parkinson’s Foundation. Despite decades of study, the exact cause of Parkinson’s disease is unknown and there is currently no cure. However, there are treatment options available including medications, therapies and surgery to minimize the symptoms and improve quality of life.

Many experts believe that Parkinson’s disease is caused by a combination of genetic and environmental factors, but age is one of the leading factors contributing to the onset of the illness. People over the age of 60 have a two to four percent risk of developing the disease, compared to one to two percent of the general population. In patients with Parkinson’s disease, the cells that produce dopamine begin to die, which slows down our brain’s messages to the body controlling and when we move. Scientists believe if we can understand this loss of dopamine cells, we can develop treatments to reverse the disease.

What Are the Symptoms of Parkinson’s Disease?

Although symptoms of Parkinson’s disease vary from person to person, the most common symptoms are:

People with Parkinson’s disease may experience secondary symptoms, which vary from person to person. These include loss of facial expression, fatigue, slurred speech, difficulty swallowing or impaired motor coordination. Parkinson’s disease also affects people in ways other than the visible movement symptoms, such as fatigue, constipation and sleep problems.

Coping with a Parkinson’s Diagnosis: What Are the Treatments Available?

Parkinson’s disease is a progressive illness, and the way the disease advances is different for everyone. Some people live with mild symptoms for many years, while others experience a rapid onset of the disease. There are many medications available to people with Parkinson’s disease manage their symptoms. In addition – physical, occupational and speech therapy; maintaining a healthy diet; and attending support groups can help people with the illness lead fuller lives.

Learn about the hospice eligibility criteria for Parkinson's Disease.

Where Can I Learn More about Parkinson’s Disease?

This year alone – 60,000 new cases of Parkinson’s disease will be diagnosed. If you have been diagnosed with Parkinson’s disease, are caring for someone with the illness, or would like to learn more about the risks and symptoms, there are many resources available:

Crossroads Hospice: Care When You Need It

No one wants to think about a life coming to an end. So too often, we do our best to deny it. We focus on the positive, explain even serious symptoms away, and put off talking about the next steps in care for our loved one.