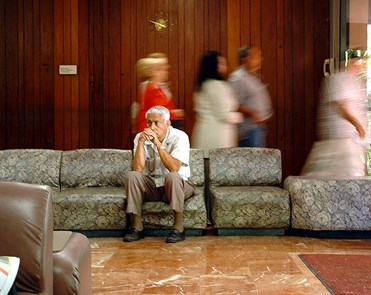 Regina Holliday became an advocate for patient after the death of her husband, Frederick Allen Holliday II. His struggle to get appropriate care occurred over 11 weeks of continuous hospitalization at five different facilities. Today’s blog, reprinted with permission, was originally posted toRegina Holliday’s Medical Advocacy Blog in September 2011.

Today, once again, I was waiting in a line at an airport.

Before my late husband Fred died from kidney cancer in 2009, I rarely flew. Perhaps we would fly to Oklahoma to see my family or I would fly to Chicago to attend an art supply trade show. Maybe once a year I flew, if that. In 2011, I have flown every month and sometimes several times a month. I stand in queue and wait through numerous flight delays, in order to represent the patient and caregiver view through story and art.

Today, my flight was delayed so I used my ample free time to stand in line at Starbucks. Beside my place in line was a promotional banner for a seasonal Starbuck’s drink.

Pumpkin spice latte is back.

My eyesight rippled as though I was viewing the world through old glass. The sheen upon on my eyes condensed and formed tears that rolled down my cheeks.

But he is dead and grief just smacked me ‘side the head as I stood numbly staring at point of purchase sign. I don’t know how many times the barista must have said, “Miss?” before I finally answered. I guess it was quite a few times by the hand-covered giggles and the knowing eye rolls the barista shared with her fellow employee. I ran my hands across my cheeks and ordered a plain latte. I wasn’t embarrassed to cry.

After all, everyone cries at airports and on airplanes.

Of course, there are the expected tears during homecoming embraces at baggage claim and the grief of farewell at the security gate. But tears at the airport are far more invasive than that. Many times I have been seated in Row 27B with the woman on left crying into her novel and the man on my right surreptitiously wiping away the tell-tale moisture while watching the inflight movie.

Recently, I even heard a story that one airline will now warn their passengers that the inflight movie will be tear-inducing to allow some folks to forgo the emotional experience in such close quarters. I heard a lot of comedians make jokes about such warnings, but I applaud the airline. Forewarned is forearmed.

Have you heard of the concept of terminal restlessness? When I first heard of it I thought of air travel and the endless pacing and waiting by the gate before embarking on the journey, but it has another meaning.

When Fred was in his third week of hospitalization, we were well and truly into the realm of what often seemed pointless waiting. This was the week that the mad rush of guests slowed and time weighed heavily upon us. On one such day of waiting, I began to talk to Fred about Steven Spielberg’s movie, The Terminal.

I sat at the foot of his bed and said, “Fred, I have been thinking about the movie The Terminaland I don’t think it is just about airports.”

He looked over to me at the foot of the bed, his too-thin arms crossed upon his chest and he managed to look professorial in a hospital gown. With his blue eyes dulled by morphine and pain he said, “Hmmm?”

“Well,” I said, “I think Tom Hank’s character has a terminal disease and he is stuck between worlds. He can’t go back to his native land of the healthy and he won’t step out of the terminal to embrace a new and frightening place that he feels he does not belong in. So, he just waits … in the terminal. He can work in repetitive tasks, he can even grasp at love, but he is stuck waiting inside the terminal.”

Fred no longer looked at me. He stared at the ceiling. His chin slightly upthrust and looking so very brave. He swallowed twice and I watched the muscles ripple across his unshaved throat. He coughed and clenched his jaws slightly before offering up a response, “It’s a theory, I guess.”

So, if I was ever asked what was the definition of terminal restlessness, I would have told you it was an apt description of a film starring Tom Hanks. But I belong to a kidney cancer widows group online, so I learned the true meaning in a recent post by a fellow widow. A little more than two years ago I can confidently say my Fred suffered terminal restlessness, but at the time I thought my Fred was just being my Fred.

Sometimes before a person dies they go from being very docile and sleepy, to somewhat frantic and upset. They will try to get out of bed and walk around, even if they have been mostly bedridden. They may yell or act as though there is something they must do, something they have forgotten. My widowed friend explained all of this within her email to the group, though her explanation was cloaked with her regret of being unable to handle such behavior even though she had been caring for her husband throughout his long illness.

As I read her explanation, I thought of two things. I thought of the term “nesting” as it applies to a pregnant mother. I remember vividly my nesting phase before the birth of both of our sons. I did so much on those days, feeling there were so many tasks I must do right away. I was pacing and doing until the contractions set in.

And I thought of the night Fred died … and I realized that night Fred was suffering terminal restlessness. But unlike my widowed friend, our experience was not one of sorrow, but instead one of comfort. You see, I fell in love with a man who paced, who frantically gestured, who liked to talk through the night about everything under the sun. Kidney cancer stole that man from me. Damn cancer for what it did to cause such a shining and exciting soul to close like a flower in the night. Damn cancer for taking the sparkle from eyes that used to gleam at the thought of pumpkin spice lattes.

And then four hours later, he died.

So now I know the clinical meaning of terminal restlessness. But think I shall call it terminal nesting instead. Because I think it is merely the final moments of waiting, the anxious preparation before we take flight.