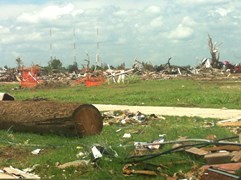 “This is NOT a tornado you want to wait out in a building of any kind! If you are not below ground, GET OUT OF THE PATH OF THIS STORM NOW!”

These are the words that echoed from the news station on Monday, May 20, 2013, sending the Crossroads Hospice staff at the Oklahoma City location searching for safety.

That day started out like any other day where weather forecasters were warning of dangerous conditions later in the day. Bad weather and tornado warnings are common for us, especially in the spring.

In the morning, with the warning of dangerous conditions, an email was sent to all staff reminding them to keep their radios tuned to the weather stations. In the office, we made sure the shelter was accessible and turned on the television to the local weather station so we could monitor the seriousness of the warnings and react if needed.

We watched the news as the tornado touched down in the Newcastle area, about 15 miles south of us, and was headed in our direction. “As is the nature of tornadoes, it was just a matter of 15 minutes or so before we knew just how bad this tornado was going to be for this area,” recalls Chaplain Chad Mock. “Almost immediately, folks were heading to their homes or to other areas away from the tornado,” he says.

“Myself and a few others remained behind,” says Chaplain Mock. When the news station issued the urgent warning to get out of the path of the tornado, he immediately evacuated the staff.

He told the few that remained in the building that they needed to leave immediately and head north on I-35 – away from the tornado. He made a quick check of the building to make sure that no one was in it, closed all the inner doors and left.

Soon after, the EF5 tornado struck the community of Moore, OK and surrounding areas — less than four miles from us — with peak winds reaching over 200 miles per hour. Twenty three people were killed and 377 were injured.

The Crossroads team went into action and checked in with all employees and patients. Although some had significant damage to their homes, all were safe.

The next morning, our Clinical Director Christina Key sent an email to everyone notifying that we were in “disaster mode” and that we needed all hands on deck. Our medical equipment company was contacted to make sure they provided portable oxygen tanks to those patients at homes or facilities without electricity.

Early the next day, Christina and several other nurses attended a Red Cross meeting to obtain information on what assistance was needed. We reached out to all the assisted living homes in the area and offered to provide help in whatever capacity we could. For some, that meant delivering supplies, such as dinnerware and plastic ware, and/or water. For others, that meant sending several employees to assist with elderly or hospice residents.

By midday, we had a good idea of where the problem areas were and who was most in need of extraordinary help. We knew which employees were impacted by the tornado and came together to collect items that those employees needed.

Sadly, tornadoes continued to rock Oklahoma City throughout May and June. The following week on Friday, May 31, another major tornado warning was sounded.

The sirens went off in Mustang, OK, about 20 miles from our offices, around 6 P.M. –and all of the residents at the Arbor House Assisted Living took cover in their closets.

After over an hour of crouching, they were dehydrated, exhausted and restless. Staff made the risky decision to round up all 60 of the residents and bring them to the center of the facility. The 18 dementia patients were gathered first and as they were all placed in the nursing station, the walls began to shake and the ceiling started to collapse.

Katherine Chadrick, Arbor House Executive Director, recalls the sound of the circular wind that shook the building and tested its stability.

During the tornado and after effects, Ms. Chadrick remembers that, ”We felt isolated with no safe place to go. We were terrified, but stayed calm for the residents.”

This storm was beyond what the staff had experienced before. The tornado was ruled an EF5 with 200+ mph winds and spanning 2.6 miles wide, the widest tornado ever recorded in the United States.

After the sirens stopped and the residents were able to evacuate, Crossroads Chaplain Cord Fowler made sure to visit the patients and confirm that they were safe and comfortable. Chaplain Fowler made many stops throughout Arbor House, comforting the patients after such a traumatic event.

A few weeks later, Arbor House asked Chaplain Fowler to participate in a staff appreciation day, and he agreed. He focused on the topic of loss.

“The more we love, the more it hurts when we lose who or what we love,” he told the staff. “The easiest way to avoid the hurt would be to love less. But that’s not a good trade. Keep on loving. It’s worth it.”

In addition to impacting our patients, the Moore, OK tornado had a personal impact for our Crossroads employees. Three of our staff lost their homes completely and a fourth was forced to move out of their rented home. In true Crossroads fashion,  staff from Crossroads locations across the country responded by donating approximately 168 hours of personal time, as well as cash and gift cards totaling over $8,500. In the time of need, the Crossroads staff always makes each other and their patients a priority. 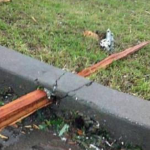 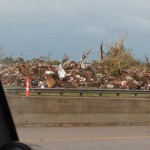 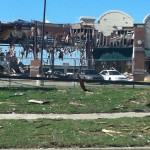 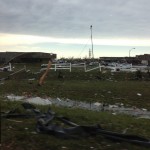 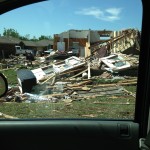 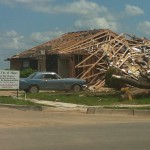 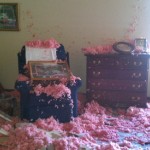 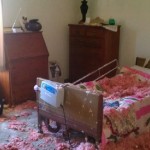