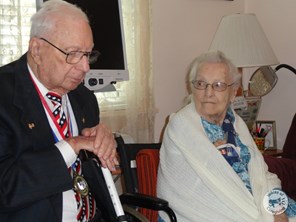 Idah and Grover Lytle grew up in New Castle, Pennsylvania. Their grandmothers were friends and their grandfathers were drinking buddies. They were childhood sweethearts who grew up to fall in love and start a family together.

Along the way, they both served in the military. Idah was a member of the Army Nurse Corp, while Grover served in the Air Force in Germany and England. After their service, Grover became a reverend, the couple had children, and the Lytles lived abroad as missionaries. The family traveled the world until their eldest, Diane, hurt her leg while hiking in Papa New Guinea. She returned to America for treatment, moved to St. Louis, and her parents soon followed.

In 1986, Diane and her parents bought a house together. In the early ‘90s, Idah’s health began to deteriorate. Professionally, Diane was a home healthcare nurse in geriatrics for over 30 years, so taking care of her parents as they aged seemed like the natural course.

“I never married and had no children myself,” Diane says. “Taking care of my parents is what I felt I needed to do. They never knew that I had committed to taking care of them, but it just seemed like it was always in my mind.”

Over the last two decades, Idah, now 93, has suffered seizures, heart attacks, and had several surgeries. She has trouble walking and suffers from dementia. Grover, 96, is legally blind and has suffered from seizures but is generally self-sufficient and alert.

For years, Diane was the sole caregiver for her parents. Eventually, Idah’s weight loss became so pronounced that she qualified for hospice care. That’s when Diane got the support she deserves.

“Crossroads has been a blessing, sending me more help than I would have gotten through another program,” says a grateful Diane.

But it’s more than the twice weekly visits from the nurses or even the volunteer that came to mow the Lytle’s lawn that she really appreciates. It’s been the Crossroads attitude, the belief that patients and their families deserve more.

“They held a ceremony for us because mom and dad are both Veterans,” says Diane. “They made it clear that Crossroads wasn’t just for the sick person. It’s for the family, too.”

Crossroads arranged for a representative of the Army and a Marine to visit the Lytles. Even though only Idah is on Crossroads services, they presented Grover with a pin and certificate for his service as well.  However, it might have been Diane who enjoyed the recognition ceremony the most.

“It just meant a lot to my parents because when you get old, people don’t mean to but they kind of forget about you. After the ceremony, they asked my parents to tell stories. My mom cried, she was so touched. I was absolutely thrilled because my parents were getting recognized for something in their lives and they were honored.”

For Diane, the Veteran’s Recognition ceremony was exemplary of an attitude she has found prevalent throughout her experiences with Crossroads.

“I am very impressed with Crossroads,” she said. “As odd as this may sound, I enjoy that when the staff comes in, they stay and have a conversation with me.”

For their part, Crossroads staff that has worked with Diane and her parents can feel good getting praise for their work from such a selfless caregiver. The woman who has dedicated herself to the health of her parents doesn’t ask for anything in return. She just wants the chance to give back.

“I’ve learned to take it a day at a time,” says Diane, offering advice to other caregivers. “Don’t get frustrated and don’t hurt anyone’s feelings. When a person you love is gone, you’ll be so thankful you took care of them and had the opportunity to get close to them. My parents did a lot for me in my life, it’s time for me to give back to them.”

To learn more about our Crossroads Hospice signature programs, please visit our website or contact us at 888-564-3405.

What Hospice Aides Wish You Knew About Hospice Care

Whether they are called CNAs or STNAs, hospice aides provide essential personal care to patients from bathing and grooming to assisting with meals and toileting needs. It is intimate care that creates strong bonds between the aide and their patients.