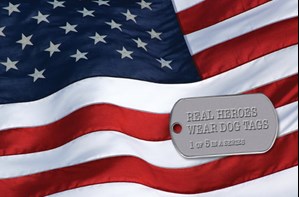 When a man or woman makes the decision to serve their country, it is not just the soldier that carries the emotional and physiological weight – their entire family does, too.

When fathers go off to war, they are separated from their families during formative years.

When husbands cross the world to defend America, their wives must pick up the slack at home and hold the fragile family unit together.

Mothers who serve are sometimes thrust into combat only a few months after giving birth.

The weight and strain of service is felt by all military families. Time, and technology, haven’t made being thousands of miles away from family any easier.

According to the U.S. Department of Veterans Affairs, this weight can become too much to bear for many relationships, and has been affecting families for generations. Research shows that the overall divorce rate among Vietnam Veterans is significantly higher than the general population, and rates of divorce are even higher for Veterans with Post-Traumatic Stress Disorder (PTSD). That’s just one war of many conflicts where the U.S. has deployed service men and women during the 20th century.

All Veterans, and their families, are forced to deal with emotional and physical distance and remember that it’s for the sake of their country. They all make tremendous forfeitures, and none of them are easily forgotten.

This is why Crossroads Hospice developed the Veteran Recognition program– to acknowledge and recognize Veteran patients and their families, and to start the healing that comes with this recognition.

The Veteran Recognition program includes a ceremony, where Veterans receive a certificate of appreciation, a medal of honor and a Veteran’s cap.  But, the ceremony is really all about the healing that can occur as a result of the recognition.

For the most effective and powerful healing, it has to be a family affair. Many families have never discussed service records, experiences or come to terms with how a loved one’s life was altered by serving in the military. In the final few weeks of life, recognition ceremonies offer everyone a chance to understand the depth of honor and sacrifice.

Chaplain James Morgan, of Crossroads Hospice, in Kansas City, is one of the people who make the recognition ceremonies possible. He’s seen many families come together to acknowledge a Veteran’s service, and start to heal from that recognition.

“I don’t have one of those stories that would make a great  ‘Hollywood ending,’ but I have consistently seen how recognition and discussion has healed small and severe family estrangement, whether it’s between a Veteran and a child, spouse, a brother or sister,” says James.

Emotional walls that have been built up by battle, or family trauma, tend to tumble down during and after these ceremonies.  Families also tend to respond more positively to ceremonies developed by chaplains or other professionals.  These neutral parties can cut through some the personal red tape, and serve as a clear voice to honor everyone’s efforts.

“Sometimes service causes friction in families. Sometimes families just have friction. But a Veteran Recognition Ceremony can open that up to dialogue.  You have to say: ‘This person wasn’t a perfect father, or a perfect husband. But, he deserves recognition for his devotion to his country,’” James explains.  “But at the same time, we’re recognizing the sacrifice that rest of the family made, acknowledging the role they played in the story.”

Not every Veteran is open, or even proud, about their military time. Acceptance and understanding at a personal and public level can dramatically shift from service in World War II, the Korean War or the Vietnam War.  Veterans might have barely mentioned their enlistment, completely avoided discussions or outright denied activity. Downplaying their role is a common theme among our heroes. With subjects who are uncooperative about being in the spotlight, the chaplains have to do some sleuthing.

“Every recognition ceremony, and every Veteran, requires that we do a great deal of research – on the person and their service.  We want to make sure we can honor the duty, and address any unresolved issues. “

Chaplains have a huge checklist. They ask questions like,  “Where did the Veteran serve?” “What was the unit?” and  most importantly, “How can we put a Veteran’s life into perspective so their family can understand it better?”

The information the chaplains find is usually news to everyone in the family. James says that after almost every recognition ceremony, he is approached by family members who were unaware of their loved one’s service.

“Their eyes are usually huge. They’re shocked.  They now know how their father, grandfather or brother was part of something. Something so much bigger than all of us.”

But Veteran Recognition Ceremonies aren’t just about the acknowledgement of a Veteran’s active service. James says that he and other Crossroads chaplains always want to remind the Veterans and attendees that service didn’t stop when the uniform was removed.

“Most Veterans don’t stop serving their country when they are discharged. A lot of these folks continue being involved with their communities. Volunteering, civil service, church roles, etc.,” James says. “You need to remind them that they have lived a life of service, and remind their families that their loved one is a devoted, selfless person. That is another part of the recognition ceremony. A thank you for everything.”

The ceremonies offer our heroes an opportunity to heal family wounds and lingering past pain; to shed light on how hard and complicated life was for the Veteran, and move beyond any negative feelings.  Recognition of this kind of lifelong service can bring some clarity and closure, and open doors to a moment of peace for all who were affected.