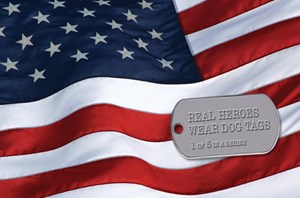 Over the next five weeks, Crossroads will be celebrating veterans in a series dubbed, “Real Heroes Wear Dog Tags”.  This series will reaffirm the importance of all our servicemen and women, and also remind us why we celebrate holidays like Memorial Day, Flag Day, Veterans Day, and of course, July 4th. We kick-off with a brief explanation behind Flag Day, one of the most honored holidays for our Real Heroes.

On Flag Day, we commemorate the adoption of the American Flag and celebrate the birthday of the United States Army. For more than 200 years, the American flag has served as a symbol of our nation’s freedom. From outside of our homes and historical monuments to as far as the moon, we fly the flag as a source of pride and patriotism. And in times of national grief, we’ve looked to our stars and stripes as a beacon of unity and healing for a new chapter.

Each year on June 14th, we recognize Flag Day with musical salutes and patriotic celebrations, many of which include traditional flag-folding ceremonies. With each of the distinctive twelve folds of the flag, we recognize principles on which our country was founded, such as liberty, justice and valor:

Once the flag is completely folded, only a triangle field of blue stars is visible, reminding us of our national motto, “In God We Trust.” In addition to national holidays such as Memorial Day and Veteran’s Day, the flag is folded at the close of a retreat ceremony, performed in celebration of the career of a retiring Air Force member, or folded and placed over the casket of a deceased Veteran honoring his service to the country.

Flag Day is also a time to honor our Veterans among us who have served to protect the flag and the ideals it represents. At Crossroads Hospice, we stand with our nation’s 23 million living veterans as they recognize fellow service men and women and look to the flag as a reflection on their own service to the country. No matter how much time has passed, Veterans carry the experiences of their military service with them, and we must understand that each Veteran views his service in a unique way. While many Veterans feel a deep sense of pride about their service, some Veterans have never shared their stories of combat, or memories of flags draped across the caskets of their fallen comrades. In all cases, it’s important to create a supportive environment for Veterans to share their experiences.

As you wave the flag on June 14th, remember that showing your gratitude for Veterans should not be limited to Flag Day, Memorial Day and Veteran’s Day. Throughout the year, join your community to thank Veterans who have served and protected our nation.

Next in our Real Hereos Wear Dog Tags Series: Do You Know a Hero?