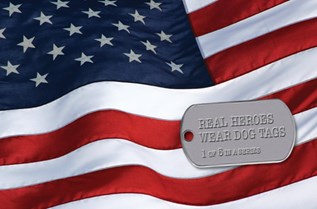 It’s estimated that over 22 millionpeople have served in the United States’ military. That’s 22 millionfamilies directly impacted by wars and political agendas. Millions of husbands, wives and children expected to continue with normal lives, during and after a loved one’s deployment or service.

But, the reality is that many Veterans return stateside having been exposed to a very different experience than the normal American life, changing them forever. Veterans and families of Veterans from all wars — from World War II to Vietnam to Iraq — work hard to blend in with civilians and their families. This isn’t always so easy.

The impacts of war and deployment can include exasperated mental illness and post traumatic stress disorder (PTSD).  PTSD was officially recognized in 1980, but this disease, along with others, has long been underreported and underdiagnosed, leaving generations of families struggling to heal the wounds of war.

Crossroads Hospice Chaplain Jacqueline Barnes is on a mission to help heal those wounds; to close that chapter of everyone’s lives.

One of the ways Jacqueline does this is through Veteran Recognition ceremonies, working specifically with hospice care. The ceremonies are two-fold in purpose: to help heal the Veteran, to give him or her the praise they deserve for their service and sacrifices; and to help heal the family, by giving them the opportunity to learn what their Veteran loved one went through and did for their country and that their service may have been a catalyst and/or cause to many of their imperfections or difficult characteristics over the years.

“We’re honoring the Veteran and the families, letting them know that we recognize their painful experiences and we are here to help them to process those emotions in a way that is healthy for all who are involved” says Jacqueline.

Jacqueline has organized and led many Veteran Recognition ceremonies, in the hopes of healing Veterans and their families. In one instance, she ignited a fire inside one Veteran – let’s call him Sam, and surprised everyone at the ceremony.

Sam had served during the World War II Era, and was admitted to hospice service after being diagnosed with a terminal illness. Sam entered care in very declining health. “I was able to speak with him the first few days of being on service, but communication was very minimal — some head nodding, minimal words, very little eye contact, but smiles and expressions of thankfulness for the visits” Jacqueline explains.

Even before getting sick, “Sam was not a big talker, so he didn’t share much of his experience with his family,” she says. What he shared, according to his family, were the things that he enjoyed such as gardening and cooking. Like many Veterans, Sam internalized his military experiences and kept his life as a serviceman separate from his family life.  When Jacqueline receives a patient who is a Veteran she contacts the family about having a Veteran Recognition Ceremony.  “This family agreed and stated that it would help them to honor Sam and it would bring healing and understanding for them,” Jacqueline says. The family later became apprehensive of holding the ceremony due to Sam’s rapid decline. Sam subsequently became unresponsive as the ceremony dates continued to be changed by the family. The family did not recognize initially,the importance of what Sam didn’t discuss; his 40+ years of service. Sam didn’t talk about it. Sam received several honors during his service to his country, enjoying his experience, and then gave attention to trying to “fit in” with his family after retirement. Since he didn’t talk about it, and was a person who insisted upon honoring others, his family had no idea as to what his service meant to him.

Even though Sam was mostly unresponsive at the time of his recognition ceremony, everyone gathered to give thanks and appreciation for all he had done. The ceremony highlighted at this time, mostly Spiritual Care due to the patient’s decline. His long time service in the military acknowledged his dedication to his country. As comfort was being provided, and favorite hymns being sung, Jacqueline ultimately was spiritually led to sing the Star Spangled Banner. Sam responded, and attempted to salute. Even in his very fragile state, the patient’s pride for his country shined through. “After that the family really began to understand the importance of Sam’s service,” she says.

This was a defining moment not only for the family but for Jacqueline as well.  “That was one of my most memorable experiences with Veteran Ceremonies and I keep the memory in my heart” says Jacqueline.  “I’ve learned to never take anything for granted.” Understanding that importance is a huge stepping-stone for healing. “Veterans appreciate the Veterans Recognition ceremony most, but then the families begin to realize how important it is,” Jacqueline says. “This realization leads to healing and they are able to learn things about the Veteran they didn’t know before.”

After organizing and conducting many Veteran Recognition ceremonies, Jacqueline has learned something very powerful: “The most important thing is that healing takes place no matter when or where,” Jacqueline explains. Even if the healing starts during end-of-life care for the Veteran, it’s a step in the right direction.