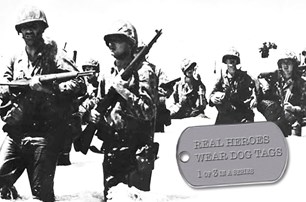 “The hopes and prayers of liberty-loving people everywhere march with you ...”

These are the famous words of General Dwight D. Eisenhower, shortly before the D-Day invasion during World War II, signaling the beginning of the end of a war that left the world battered, exhausted and shocked at the inhumane crimes committed throughout.

These words hold true for all soldiers in WW II — the people who marched forward, knowing that the very freedom we loved hung in the balance; the people who looked enemy gunfire and death in the face and bravely fought for their country. They’re what defined “the greatest generation,” sacrificing everything to protect freedom for future generations.

Fowler, a chaplain at Crossroads Hospice, knows about the sacrifices of Veterans better than most chaplains, because of his own seven-year service in the Navy. He regularly performs Veteran Recognition Ceremonies for patients who have served in the military and his own experience in the service helps him relate to patients and their families in a unique way.

“[Veterans] make a huge difference in our world – in our country – and they deserve a hero’s send off,” Fowler says.

Although every Veteran Recognition Ceremony is significant, Fowler was especially moved by Copper’s story.

Copper drove an amphibious landing vehicle to shore during the Battle of Tarawa, transporting Marines through rough, foaming ocean water to the front lines of a deadly and difficult battle. From the beginning of the combat, there were problems: a low tide and coral reef stranded the landing crafts, leaving the Marines no choice but to swim to shore some one hundred yards away -- completely vulnerable -- and directly into enemy gunfire. After three treacherous days of battle, Copper was one of the soldiers who helped the U.S. emerge victorious. He, like all those who serve in combat, is a hero.

Copper’s story resonated with Fowler, who served in the Navy from 1985 to 1992, specifically on a ship named for the very battle in which Copper served. He went overseas during Desert Storm, and at one point, one of the ships in his fleet struck a mine and four sailors died. There were moments where Fowler thought, “This could be my last second.”

“It was very sobering,” Fowler says. “My duty was nothing compared to what WW II, Vietnam or Korean War Veterans [went through]. [Serving in the Navy] gave me a deeper appreciation of the sacrifices the fellows before me made.”

It’s through Crossroads Hospice that these two Veterans met, and one Veteran was able to pass along his extraordinary experience to another. “It was history coming alive – it was amazing,” Fowler said.

Copper recounted the story of the Battle of Tarawa, exposing Fowler to a first-hand account of what it was like to be on the front lines.

Between November 20 and November 23, 1943, more than 1,000 U.S troops were killed and another 2,000 wounded at the Battle of Tarawa. In 76 hours, U.S. Marines suffered almost as many casualties as U.S. troops suffered in a six-month campaign at another South Pacific island during WW II.

At this battle, Copper was carrying a squad of Marines to the island of Betio, part of the Tarawa Atoll. Because of a miscalculation, the tide was low and U.S. boats began hitting coral about 100 yards away from the beach. As bullets whizzed by their heads, the squad leader said to Copper, “We’re going to die here – do something.” Copper opened the gates and the Marines splashed into waist–to–chest–deep water.

With the load of the boat lightened, Copper was able to move it off the coral but the vessel had sustained major damage. He returned to the carrier ship, only to be placed in a line with the other boats. He took his boat to the front and made it clear that if they didn’t take the boat back then, they’d “have to recover it from the bottom of the ocean!” His boat was moved to the front of the line and its hole repaired.

Honored to hear the story

Fowler, “in awe” after hearing the story, noticed that the conversation ended abruptly. Copper had fallen silent. It seemed like the Veteran hadn’t gone back to the Battle of Tarawa in his memories for a very long time. There was lingering guilt for the Marines he carried to shore, knowing that by the time they reached shore, many of them had lost their radios and other methods of communications to water damage, leaving them leaderless.

“I’m honored to know him,” Fowler says. “I tried to convey to him how I appreciated what he had done.”

Copper’s Veteran Recognition Ceremony, and ceremonies for other Veterans under Crossroad Hospice’s care, are “an opportunity to make sure that they understand that they made a difference,” Fowler says. “Even though they’re not the same men and women they once were, they’re still valuable.”