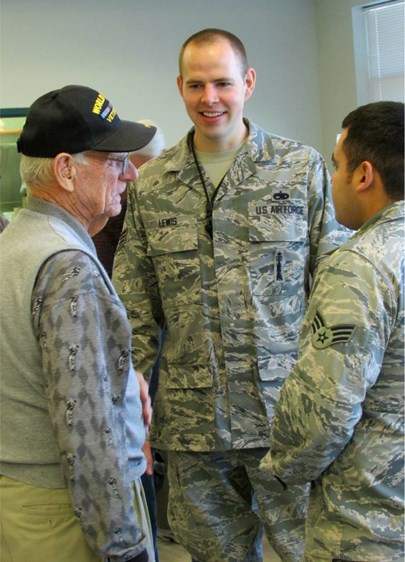 Any Veteran can tell you about the difficulties that come along with transition from service to civilian life, but Crossroads Hospice Chaplain and Veteran Chad Vickers will tell you that the truth is, it’s different for everyone.

“For me,” Vickers says, “having spent five years [in the military] may be a little bit different than someone who has spent 20-plus and actually retires from it.”

There are so many different kinds of Veterans: career, medically retired, administratively discharged, and more. So to assume that each of these men and women share the same exact experience would be doing them a great disservice.

In any case, however, the transition from service to civilian life can be a long uphill battle. The subject itself is one of great magnitude with big questions that require even bigger solutions.  No matter who you are, it’s one that affects every single one of us.

The transition can be equally exciting as it is nerve wracking. For Vickers, that was exactly the case.

“It’s exciting in one respect because there are new opportunities” Vickers says. “I had some goals and dreams of what life would be like once my service was over because, being a career service member whenever I first went in, I was able to learn some things, travel the world and it would help to pay for college, which it kind of did.”

But there was also that anxiety, which could stem from a number of things for those returning from duty:

And that’s really just scratching the surface, especially for those who have seen battle. These anxieties, of course, turn into the larger problems: homelessness, unemployment, depression, alcoholism. It’s tragic.

Other times, it’s not.

Coming back to civilian life — an entirely different world — from war can be intimidating, but it doesn’t have to be so hard. There are ways we can help and there are people already out there doing their part. Veterans cope with their new lives in thousands — scratch that — countless different ways. More ways than we could list. However, some ways are often found to be more widely effective than others. Here are a few:

Being in the military can help you pay for college. It did for Vickers, and for him, this opportunity played a large role in getting him through college.

“I was able to enroll in a local university,” he says, “and it was a little bit of a struggle for me, but the military prepared me.”

After school, he was able to enjoy a successful career as a chaplain that eventually led him to providing spiritual care and comfort for patients with Crossroads.

Find out all about the educational benefits the Department of Veterans Affairs offers here.

Skills acquired while in service translate to entrepreneurship more than most people assume.  That’s why there are startup incubators, like The Bunker, that work to ensure those skills are put to use upon the return of our Veterans. This is something that CEO of The Bunker Todd Connor feels strongly about:

"Veterans rebuilt the economy after WW II when the troops came home, and 49 percent of them went on to start and own companies,” Connor says. “This is why we called them the ‘Greatest Generation.’ Our economy, now more than ever, needs what this generation’s returning Veterans can bring to the table as entrepreneurs, as innovators, as disruptors. Our country needs them to lead the innovation sector  — and they are ready to do it."

In this regard especially, they don’t just need us; we really need them.

Getting started with the transition can sometimes be as easy as a database search. Vickers took special note of some databases which he believes could be most effective: ExploreVA, TAOnline, Veterans ReEmployment, Make the Connection and Warrior Gateway. The internet is a powerful tool in this process.

Sometimes as the American public, according to Vickers, helping out is not always so complicated.

“I think thank you’s are huge if they’re genuine and authentic,” he says. “You can’t expect someone who has not served to understand what you’ve seen, where you’ve been, what you’ve sacrificed — but often times I am thanked and if I sense it’s genuine, it’s really appreciated.”

We can all play our part.

The Real Heroes Wear Dog Tags series began in 2013. Read previously featured Veterans’ stories and learn more about how Crossroads recognizes and cares for our Veterans.