Linzy Laughhunn is a Lieutenant Colonel in the United States Air Force, serving as Wing Chaplain for the 192nd Fighter Wing at Langley Air Force Base. Last week, he joined Crossroads Hospice & Palliative Care to perform Veteran Recognition Ceremonies for Veterans in long-term-care facilities in the St. Louis area. Each ceremony was incredibly moving. He shared a few of his experiences with us. 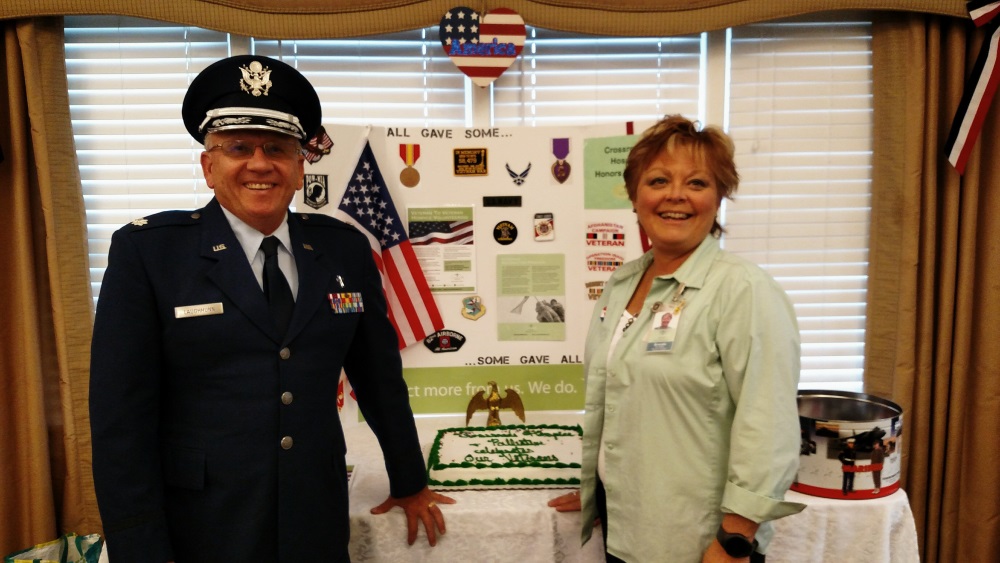 There was one woman I wasn't sure was cognitively 'with us,' but when I asked about the simple, single dog tag hung around her neck, she brought out the biggest, ear-to-ear smile.  "That was my Dad's, he served in WWI."  I hope he knew he had a daughter that would long, long remember him.  We could only hope that much in our wildest dream – to not be forgotten. 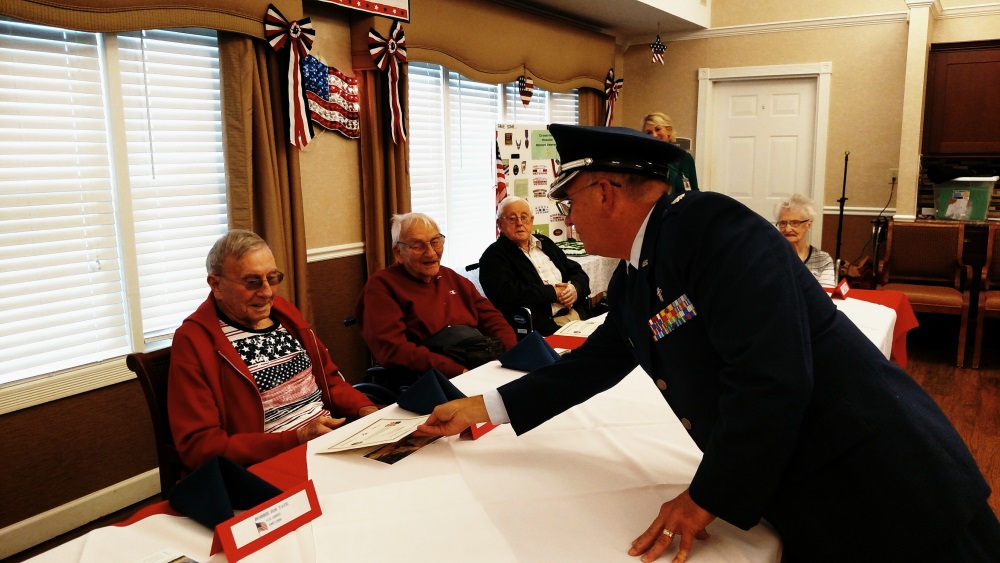 No Solider Left Behind

Then there was one Veteran who could not get out of bed to attend the ceremony.  Like in battle, it’s "no solider left behind."  We went to find him and others, one by one.  The first gentleman was an Army Veteran who was very young to be in a nursing home, too young in my mind.  He seemed sad and alone.  But whatever his story, he was so touched when we came around the corner and introduced ourselves, seeing an officer in service dress.

There he was, tangled up in his bedding, a food tray littered with odds and ends, living most of his life in a small corner behind a curtain with only a little TV to provide company.  Somehow, I hope we took him back to a big wide world, to when he was strong and capable, to the day he pledged his oath to be willing to give his all, travelling to far off places like Vietnam.

Perhaps remembering himself as a younger man, laughing and joking, full of health and hope, with his fellow soldiers – with whom he felt for a season every bit as connected as any family bond could be – letting him know he belonged and was needed.  Learning and doing things "for real" that little boys only dreamed about in their 'play' together in their back yards.  Big tears pooled at the corners of his eyes.  We left, as he was touching his new US flag lapel pin, looking at the certificate we left.  For a moment, I hope he was once again the hero he knew he always could be, and felt like 'once upon a time in a land far, far away.' 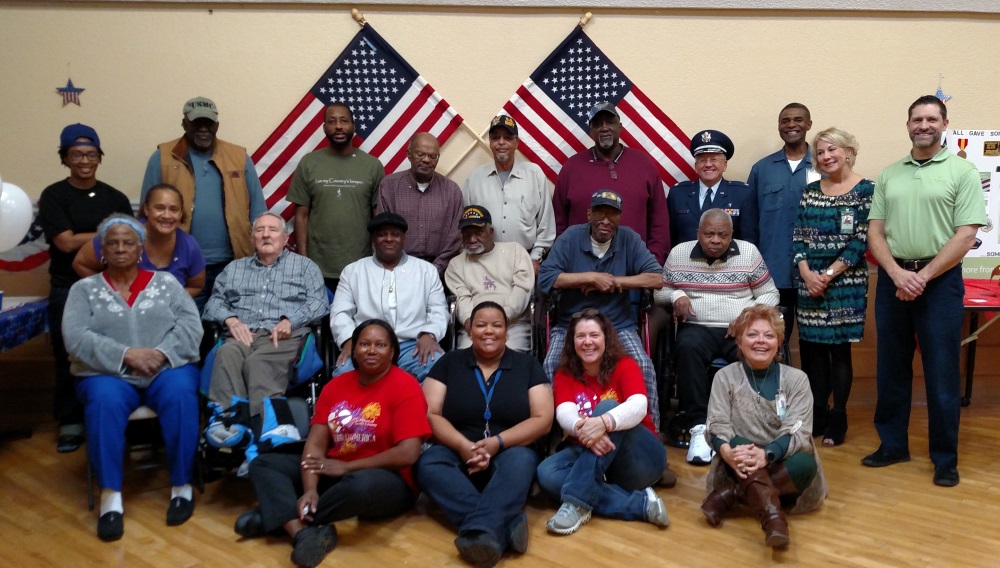 Another Veteran we found in his room, alone.  He was going to begin hospice service that same day.  He said, "This made it the best day!"  I sure hope it was, and that are all are now.  He doesn't have many left.

A Story of Generations

At one of ceremonies where we gathered, they had a table with four generations of ladies – a grandmother, daughter and granddaughter who had all served.  Amazing.  A great-grandaughter was with them. I teased her about following in this strong tradition of strong women.  She said she wanted to be a doctor.  I said, "I hope you look at your mom, grandmother and great-grandmother and decide to be a doctor taking care of the soldiers who need help, too." She bashfully smiled, hugging her mom.  Who knows...

At another ceremony, a man wearing a Vietnam cap had to leave the room.  I don't know how all this touched his soul, but it was too much for him in the moment.  I saw him out of the corner of my eye, standing down the hall.  That was as close to this that he could bring himself.  I could not even imagine the memories that he may still bear; some scars many still carry....both buried deep down and just under the surface at the same time. 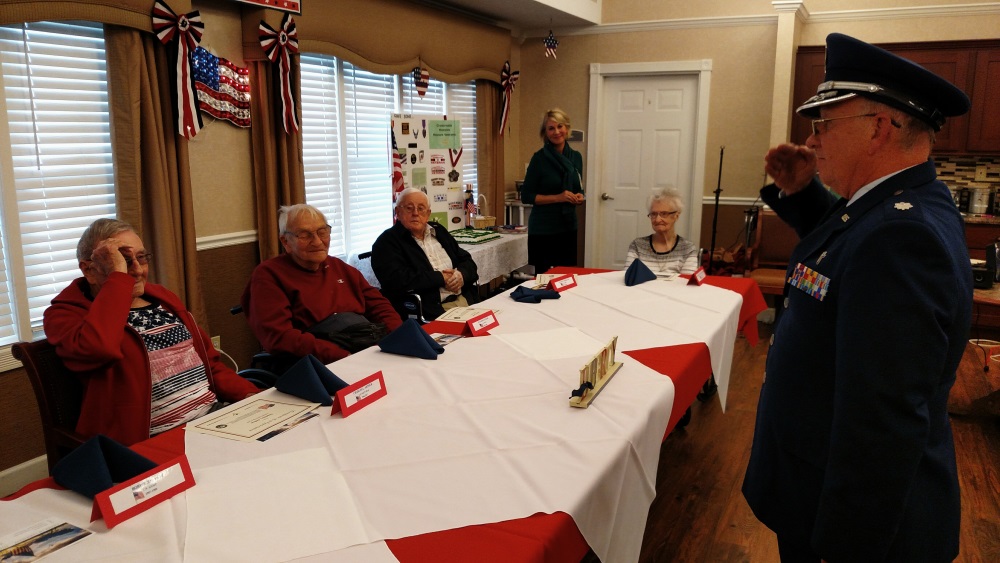 One daughter pulled me by the hand, literally, to her table.  Proudly, she introduced me to her father, who could not talk, but had the greatest smile.  His hands did not work very well either, but such as they were, he gripped mine in his.  When he tried to return a salute with that crooked hand and arm that no longer wanted to do his bidding like before, it was the best I'd seen in a long time.  He was sitting in a wheelchair.  I could make out some of the words, but he certainly knew what was going on.  His daughter said, "Dad went to England when he was 19 and came back a hero – and he also came back with me, too.  He met my mom and adopted me and brought us both back to America where I am so grateful to live every day of my life.  This man is a hero to me in more ways than one!"

All in all, it was a very good Veterans Day.