Veteran’s Day is a special time we reserve to honor our military Veterans and the continuous efforts they have made towards protecting our freedom and sustaining our liberty.  In reality, this is something that we could, as a whole, afford to devote a bit more time and effort towards.

Each year, the Oklahoma Women Veterans Organization does so by recognizing one female Veteran as the Oklahoma Woman Veteran of the Year.  For her outstanding work with her peers and in the community, this was recently awarded to Coral Porch in 2015. 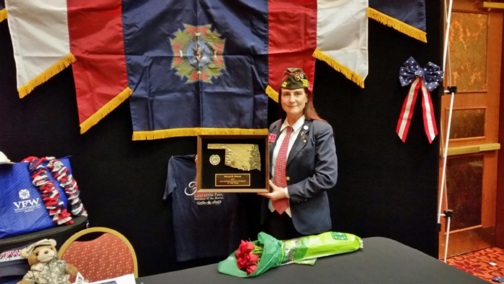 Enlisting in the Army at age 25, in 1995, Porch spent three tours in Germany, one tour in Korea, one tour in Bosnia, and another in Masadonia between then and 2012.

We sat down with Porch, in the spirit of Veteran’s Day, to hear her story as well as learn more about what we can do to help and honor those who served.  This interview has been edited for clarity and content.

Crossroads: So how did you initially react to being deployed?

Coral Porch: I was excited.  I was scared a little bit.  I’d never been out of Alabama, which is my home state.  The first night when I actually enlisted, that was the first airplane ride that I remember in my lifetime.  It was first time away from home—even though I was 25—and I realized I had to do this on my own and no one was here to take care of me.  It was quite scary at times, but that’s when I reached out to the friends I had in the unit and it became a team building type of thing.

How important were those friends in your experiences?  Are you still in contact with any of them?

Over the years—obviously the internet wasn’t what it is—but there are still about 15 or 20 I keep up with that I went to basic training with and spent time at the first duty station with.  There are many more friends that were important in different countries—but I just don’t keep up with them.  I try and reach out on Facebook and via text message because it’s a different type of camaraderie you have with them—it’s a different type of family.  It’s still the camaraderie that you’ve got a brother or sister out there that you served with and know exactly what you’ve been through.  It’s a support network.

Was it difficult going from that family and structure you had in service back to civilian life in the States?  What was that transition like for you?

It was almost a little bit of separation anxiety because I wasn’t still in.  Because I chose not to stay in.  It’s different when it’s not your blood family, yet everyone wants to keep up with each other after they’ve gotten out.

I met my husband at my first duty station in 1995 and married in the summer of 1996.  Our first daughter was born in July of 1997.  So we were full military.  Being a 4th generation Army Veteran, plus being married to a soldier, I kind of had a different type of support network than others.  A lot of the spouses—and I don’t say husbands I say spouses because there’s a lot of female Veterans out there too—but the spouses sometime don’t know what we go through.  So I had a great support network.  My husband knew exactly what I was going through.

So you think that was probably a different experience for other female Veterans.

I think so.  Mainly because they probably didn’t get treated—I don’t want to say as good—but as welcomed if they didn’t have military spouses.  They didn’t have that type of military support.

Do you think that may be different now than it was in the ‘90s?

I’d have to say for the Army, at least for the females, that now it’s more accepted when you have a military spouse whereas back then, it really wasn’t because if you were different branches or in different places you have to worry about how to keep it together when you’re not together.  Who’s going to take care of the family, the kids?  I was fortunate enough to have a support network that I didn’t have to worry about that too much.  But there was always the fear of “Am I coming back home?  Will I see my family again?”

Can you tell me about that anxiety? Fearing that you wouldn’t come home.  Were you seeing a lot of combat?

I wasn’t in Iraq and I wasn’t in Afghanistan—but it was what I saw in Bosnia.  There were the Serbs and the Croats who were in the streets with AK-47s so you felt like you had to sleep with one eye open wondering if someone is going to come in this building and attack or worse.  I kept trying to keep my focus because I was there to defend as a part of a United Nations peacekeeping operation. There were some points that I was certainly scared for my life.

I have a lot of nightmares because of what I saw.  It was a combat duty job—a hazardous one—mainly because we were being shot at even though we were there as peacekeepers.  We didn’t go anywhere without our weapons.  We wouldn’t go too many places not in uniform.  It wasn’t a field trip or a party like some might think.

How long were you in Bosnia?

I was there for nine months.

I know we touched on this a bit, but isn’t it difficult to go from that kind of environment—where you’re being shot at and scared for your life for so long as nine months—back to regular home life in America?

I was stationed in Germany when I got deployed to Bosnia.  Then to go to Bosnia, and be involved in some things that… Bad PTSD.  Just definitely some very bad PTSD.  Bad nightmares.  Then you go back home and—I didn’t sleep in the family bed basically for about three or four months because of these things.  All of this excess baggage I came back with.

Is that something you still struggle with?

Yes I do.  Thank goodness for the VA medical center.  They have excellent counselors I see three times a month.  Certain dates are not good for me because they bring back bad memories.

Are there any other types of services and resources that you would say helped you get from where you were when you came back to where you are now?

There was a women’s support group that I attended not just because it was a women’s groups but—the first time I attended the group it was a male counselor.  Not that I had a problem with it, but some of the other ladies had a problem dealing with men than I did.  I could deal with the male leadership and figure but there were women who were much worse than I was.  They wouldn’t even be in the same room alone with a male just because of the other things that they had seen.  Things they’ve seen from males degrading females just because they can.  It’s that male dominance, sexism, gender discrimination.  Just because I’m a female doesn’t mean I can’t defend myself.  I built a lot of strength and fortitude just because of the things that I have witnessed and was a part of—good or bad.  Some people might call it tough love or tough training.  I just call it they things that make me a stronger person.

Obviously there’s the 2016 presidential election coming up.  Regardless of any other political views—what would you hope to see the winning candidate do for Veterans?

For hundreds of years, millions of Veterans have dedicated their lives to looking after us.  It's important that we are able to return the favor.  Whether that be through providing comfort and care at end-of-life, pushing for better benefits, or even offering a simple thank you, there's a role each of us can play to do our part.