National Cancer Survivor’s Day: a day to celebrate and reflect 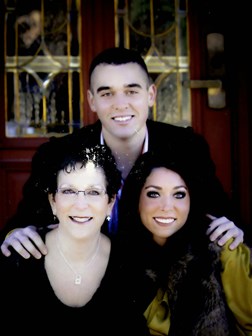 National Cancer Survivor’s Day is an important day for anyone who has lived through a battle with cancer, or is currently battling cancer. It’s a day to celebrate those who have survived, and inspire those who have recently been diagnosed. The fight against cancer is long and hard, but on June 2nd, cancer survivors and their families and friends unite to celebrate the victories along the way.

As a survivor, I also celebrate a very personal date: February 13th — the day I learned I was cancer-free after a seven month battle.

My fight against cancer started more than 22 years ago, in October of 1990. At age 28, my life seemed perfect: I was married, had a fulfilling career as a teacher and had a 4-year-old daughter and 7-week-old son.

One day, out of the blue, my foot went numb. At first I thought that my foot was simply asleep. But, the numbness did not go away. In fact, it began to travel up my leg and was soon accompanied by pain.

I went to my primary care physician and he diagnosed me with sciatic nerve pain and attributed it to having just had a baby. He prescribed medicine and sent me home.

Four months later, after taking the medicine and visiting two chiropractors, the pain became unbearable. I went back to my primary care physician, and he performed a series of tests and scans, which revealed that I did indeed have a mass on my spine.

On February 13, 1991 I had surgery, but the surgeons were only able to remove part of the mass. I was diagnosed with non-Hodgkin’s lymphoma, and needed treatment to eliminate the remaining part of the mass.

For the next six months I underwent aggressive chemotherapy, which left me tired and bald. During those six months, I continued to work and relied on family and friends for support and help caring for my children. Following chemotherapy, I went through six weeks of radiation. I was declared in remission following the radiation.

Cancer is part of who I am now and the reason I work in hospice. During the whole time — from diagnosis to remission — I was involved with an amazing team of doctors, nurses and social workers. Seeing the incredible work these people did for me inspired me to work in the medical field. I wanted to give back and be involved with people who were experiencing the same challenges I once did. In 2002, I retired from teaching and went back to school to get my Masters of Social Work degree.

With my new degree and career path, I was hired by Crossroads Hospice and I have been with them for nine years. This has definitely been the right path for me. I am blessed beyond measure to have my two wonderful children, family, friends, a rewarding and meaningful career — and most importantly my life.

For the past 22 years, I’ve celebrated my “Cancer Anniversary” on February 13th and I am proud to say I AM a cancer survivor! If you’re fighting cancer, survived cancer, or know someone who has, take the time to celebrate today.

Is COVID-19 Coming for the Holidays?

During a rare free moment this month, I was able to visit my cosmetologist for a little bit of rare pampering. As we sat together – our conversation muffled by our masks – she made a funny little quip. “Oh, ‘Rona,” she proclaimed. “Are we going to be buying you a holiday gift this year?”

Career paths are a popular back-to-school topic as millions of students around the country return to the classroom – or virtual classroom, as the COVID-19 pandemic continues.

As we enter another month of dealing with the ever-changing pandemic, new challenges continue to present themselves. One of the more frustrating aspects as a healthcare professional is keeping up with minute-by-minute changes in information.