Meet Oscar, the Cat that Predicts Death and Provides Comfort 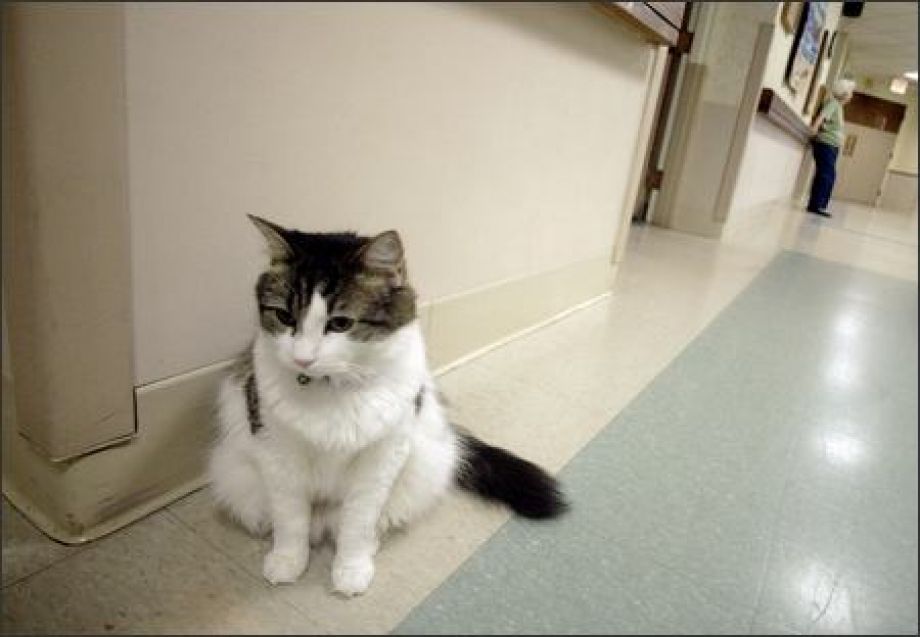 Time and time again, animals have proven the ability to provide an unparalleled level of comfort for end-of-life patients. Yet what has famously transpired at Steere House Nursing and Rehabilitation Centerin Providence, RI over the past decade has, quite frankly, still managed to leave us speechless.

What has famously transpired is the story of Oscar the Hospice Cat, known for his ability to predict death and comfort patients who will soon pass away. A story so compelling that Dr. David Dosa, a health researcher at Brown University and a geriatrician working with patients at the Steere House, actually wrote an entire book about it.

“Oscar was initially sort of a very scared cat,” Dr. Dosa tells Crossroads Hospice about the cat’s earlier days at Steere House, which began in 2005.

“He wouldn’t really like to come out. He would keep to himself. Often times you’d find him in the supply closet or under a bed somewhere and it wasn’t really until somebody was near death that Oscar would sort of come out front and center.”

It began gradually. A regular therapy cat — in the dementia unit where, unfortunately, death is a common occurrence — would go about his usual cat business until, somehow, he sensed that the end was coming for a patient nearby. Oscar would essentially come out from his hiding, find the patient in need, crawl up to them for comfort and hold a little vigil in their honor.

There was something special about it.

“As it turned out,” Dr. Dosa explains, “we would eventually find out after he did this several times that the people he was staying with were usually the next ones to go. One death occurred, then two deaths and ultimately he hit about 20 or 30 deaths in a row at which point everybody started to say, ‘Wow, this is something quite unique.’”

People’s reactions to such a phenomenon vary. Some people call Oscar the Angel of Death; others just an angel. Perhaps Oscar exhibits some type of spiritual connection beyond what humans have yet to discover. Or maybe cats and dogs can quite literally smell the future.

“I think that ultimately your guess is as good as mine,” Dr. Dosa speculates. “It [could be] likely that he’s responding to some smell when cells start to break down.”

But through all of the speculation, there’s one thing we know to be true of the story: Oscar has proven to us that, regardless of how he’s able to sense impending death, he has an interest in honoring these people at the end of their lives and providing them whatever comfort he can by simply being in their presence.

Perhaps it’s something all animals can do, but Oscar’s story is unique in the fact that he has what most other animals don’t: opportunity— a home where he can put these skills to use.

If anything, it speaks to the value of comfort and care at the end of life. If a regular house cat is able to practice such, then we, as humans, should be able to make the effort in going above and beyond and seize our opportunity.

For more about this special pet, read Dr. Dosa’s Making the Rounds with Oscar.

For the Crossroads philosophy on comfort, care and compassion, head here.

The Dangers of Doing Too Much, Too Late

It can be difficult to accept that a serious illness has become a terminal illness. This is true regardless of age or symptoms or disease. This can be true if the illness has only recently been diagnosed or if it’s been a chronic condition.

The Benefits of Hospice Care

When facing a serious illness, there may come a time when treatments are no longer working or you or your loved one may decide to change treatment goals from curative to managing symptoms and focusing on the people and things that matter most. This is when the benefits of hospice care can help.

How Hospice Benefits People with Dementia

Dementia is not a specific disease, but rather it is a term used to describe a group of symptoms that affect memory, thinking, decision making, and social abilities. While people often live for years with dementia, it is a progressive condition and ultimately a terminal illness.