Reuniting a Man and His Dog 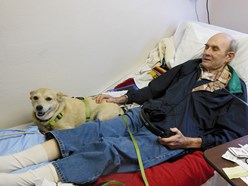 The sweet, furry face peering from inside the cage was scheduled to be euthanized within 24 hours.

Animal lover Billy Briggs couldn’t let that happen. He brought the yellow terrier mix home and she became known as Baby Girl. This dog truly was Billy’s best friend — the two were inseparable for years.

Then, illness began to take its toll on Billy, and as his health declined, he was forced to move into an assisted living residence. Although the residence allowed pet visits, they did require that all pets have current vaccinations.

“When we asked Billy what he would like for his Gift of a Day, he told us about Baby Girl and how much he was missing her. We knew we had to make this visit happen,” says Volunteer Coordinator Shane Hinz.

Shane reached out to the Bella Foundation in Oklahoma City. In May, this non-profit animal rescue worked hard to help reunite owners with pets that had become lost during the Moore, OK tornado.

As the city got back on its feet, Bella Foundation pitched in with free vaccinations and micro-chipping for pets in the Moore area.

When Bella Foundation heard about Billy and Baby Girl’s situation, they acted quickly to make sure she got her shots and vaccinations so she could be reunited with her owner, too.

Soon after, the team from Crossroads Hospice arranged for Billy and Baby Girl to meet again. Shane stopped by in the morning with the dog who clearly remembered her owner.

“Billy was just beside himself, very tearful, and so happy to be reunited with his dog,” says Shane.

The two spent the morning outside, but as Billy became tired he brought the dog back to his room and they spent the afternoon in bed.

After this visit, Billy’s friends adopted his dog. She’s now living with them and makes regular visits to Billy in the facility to lift his spirits.

“Having Baby Girl back in his life has made a huge difference for Billy. We’re so glad we could make this reunion possible,” says Shane.