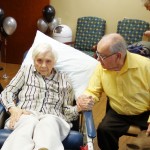 This year, the Crossroads team helped them to celebrate their 71stwedding anniversarytogether at the Highlands of Memphis.

Ella and Waymon married on February 9, 1942. Ten months later, their first son was born. The proud papa spent a mere three days with his newborn before he went off to war and didn’t return for three years.

Waymon served as an army medic under General Patton where he earned his nickname, “Doc.” When the family started looking into his service, they found he had earned six medals throughout the war. The medals were awarded to him in a ceremony more than 50 years after the war.

While Waymon was serving in Africa, Ella did her part for the war effort. She went to work at the Douglas Aircraft Company, where she helped build planes.

“They have had a wonderful life together,” says their daughter, Joy. “Their children and grandchildren all model their lives after them.”

Their 71-year union is a model for us all.