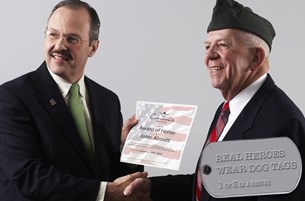 Military service is a family affair. It’s not just the soldier who makes sacrifices to honor the U.S., the families also face the harsh reality of service. When a family member is in the military, it doesn’t matter who’s graduating, who’s getting married, or who’s dying — because protecting U.S. citizens is always more important.

The families are the ones who post the yellow ribbons on trees, hoping their loved ones will return from war safely. They arrange the surprise “welcome home” parades, inviting the entire town to come celebrate that the love of their life is home again. And they’re the ones who openly weep when their soldier — their mother, father, daughter, son — is safely back in their arms. The simple act of touching a loved one who was once so very far away making the rest of the world fade away.

Being the families of military service men and women is no easy task: Spouses are forced to act as both mom and dad during deployments, and children have no other option than to adapt to the temporary absence of a parent.

But despite the long days and nights with a gaping hole left by a deployed loved one, being part of a military family can be inspiring and foster resilience. The rate of voluntary military service is twice as high among sons with military fathers when compared to sons with civilian fathers. And even with all the stress deployment can take on a marriage, military marriages are less likely to end in divorce than civilian marriages.

The strength, flexibility and honor displayed by a military family is something to be admired and honored. That’s why the Veteran Recognition Ceremonies at Crossroads Hospice involves Veterans and their family.

For Kyle Ward, Crossroads Hospice Chaplain and Army Chaplain, it’s important to recognize the sacrifices made by all Veterans, across all generations, which is why he is honored to participate in our Veteran Recognition Ceremonies. “[The Ceremony] provides an opportunity for the patient and the family to reflect on the Veteran’s service,” explains Ward.

Veterans can be humble about their service, feeling it was a duty as a citizen. They can also feel that because their service was so long ago, its relevance has been lost. After the uniform is gone and civilian life becomes the norm, Veterans can feel forgotten; their duty being just that: a duty that needed to be done.

Crossroads Hospice and chaplains like Ward understand that sentiment, but feel it is important to honor the service of their military patients. Often they step in and refresh the appreciation for duty with vigor. “I mostly bring the Veteran Recognition Ceremony up to the family – the patient is usually very humble,” Ward explains. “Sometimes, [Veterans] feel like there’s no meaning behind their service. These ceremonies bring purpose to their sacrifice,” Ward says.

Ward met a patient and family in hospice care that was deserving of a Veteran Recognition Ceremony. The patient was Joseph Edwards* and he served in World War II. Edwards was stationed in Australia and the Philippines and served as an engineer in the Army, helping to create landing strips for airplanes. Because Edwards’s medical condition prohibited his speech, Ward spoke with the Veteran’s son, Ernie. “I said, ‘Do you remember stories of your dad growing up?’ and he shared some war stories,” Ward says. Then, Ward asked Ernie, “Did you serve?”

After a period of silence, Ernie quietly answered, that yes—he served in the Vietnam War.

Typically, the Veteran Recognition Ceremony is to honor the Veteran under Crossroads Hospice’s care, but Ward wanted to recognize Ernie’s service too. “[Many] who served in Vietnam weren’t recognized,” Ward says, referring to the social tensions caused by the Vietnam War in the 1960s.

Humility, like inspiration to serve in the military, is also a family affair when it comes to the Edwards. Both Veterans shy away from recognition for their service, but both are fully deserving of honor.

And honored they were.

At the Veteran Recognition Ceremony, the room was filled with a family bonded by blood and service. Edwards and his son set aside their inherent humility for the day, ready to be recognized for not only for their sacrifices, but for the ones their family made too.

Edwards’ wife, who was also under Crossroads Hospice’s care and unable to speak, was in the room. Upon seeing each other, both their faces lit up, exchanging a silent joy and pride. “They knew what was going on,” said Ward. The long days and nights away from each other, and the stress from the lingering threat of losing a love, faded away as the recognition ceremony came underway. Two hearts, bonded as one, even after their voices were gone.

The ceremony was emotional, and the recognition of the Veterans and their service brought the family together with a common goal of honoring their kin – their heroes. The past years of ebbs and flows of phone calls and visits, and making it to holiday dinners (or not), were hushed by the gratitude the family had for each other and the acknowledgment of the bond they share through service. These were the people who were the core of their lives; the ones they thought of day and night during deployments. “From Ernie’s mom and dad, to his sister, they all teared up thinking about their service and some of the stuff they had to go through after coming home,” Ward says.

In the end, the goal of the ceremony was met: Edwards and his son were both recognized for their service and sacrifice. “It’s great to be able to tell other people who have served, ‘You guys left a legacy. To serve our country and protect our families – what they did was important,’” Ward says. “I feel like I’m walking in the shadows of giants.”

If you have any questions about our Veteran's Recognition program or any Crossroads Hospice programs, please contact us at 888-564-3405.